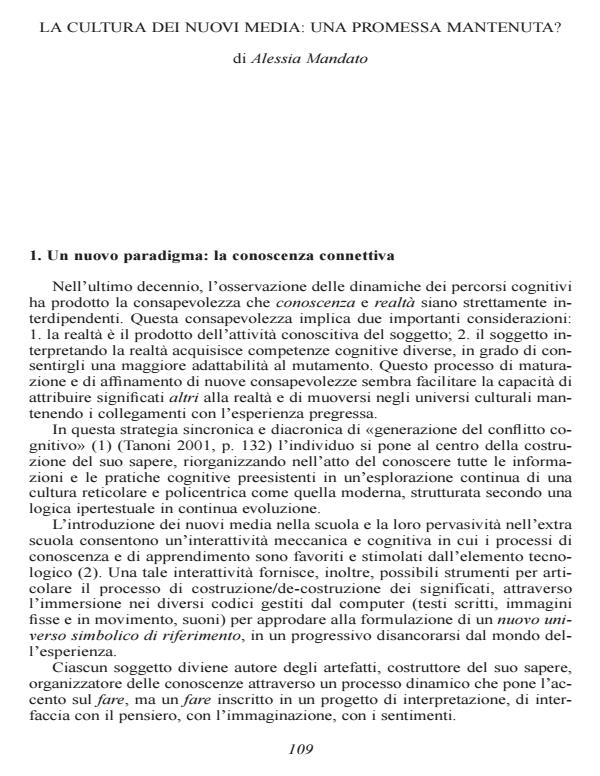 Instead of being only a symptomatic witness of the development of the new reticular and polycentric culture, the school of today, as the main referent of education, can certainly play the role of its interpreter; by supplying the student, who is the fulcrum and the manager of the cognitive process, with correct epistemological instruments, it can match the scholastic world of education, the one of linear, analytic, forced-march learning, with the experimental world, which means synthetic, reticular and interconnected learning, led by the vocational medium of the new technologies. By the analysis of the stages of an announced change, we can outline the new paradigms through which declining the new scene of learning mediated by the technology, with particular attention to the new shapes of knowledge. Above all, we must consider the real usage of some instruments, such as the hypertext, in the light of the Media Education, seen as an opportunity of integration between paradigms, interpretative models and models incorporated into action, well ready for certification and evaluation. The introduction of the new technologies in the educative perspective, as it will emerge from the present study, can determine meaningful redefinitions of interactions between the actors of the educative process and its context of reference, between traditional knowledge and new knowledge, between the instruments that we employ and the effects that we can produce. Such a change determines, in many cases, the possibility of redesign the route of knowledge activated by the medial fruition, establishing warm points of contact between negotiation of knowledge and its synthesis in the weave of experience. Finally, it’s important to note another possible viewpoint by which understand the relationship between media and education: the actual involvement of the deeper dimensions of the learner everyday life, the production of meaningful pushes to change and the adhesion to the meaning of reality. This process can and must be activated by the employment of the media and the new media inside and outside the school, as long as they constitute the common object on which working, and as long as they are the cultural coupler between being in this world and planning out a different world.