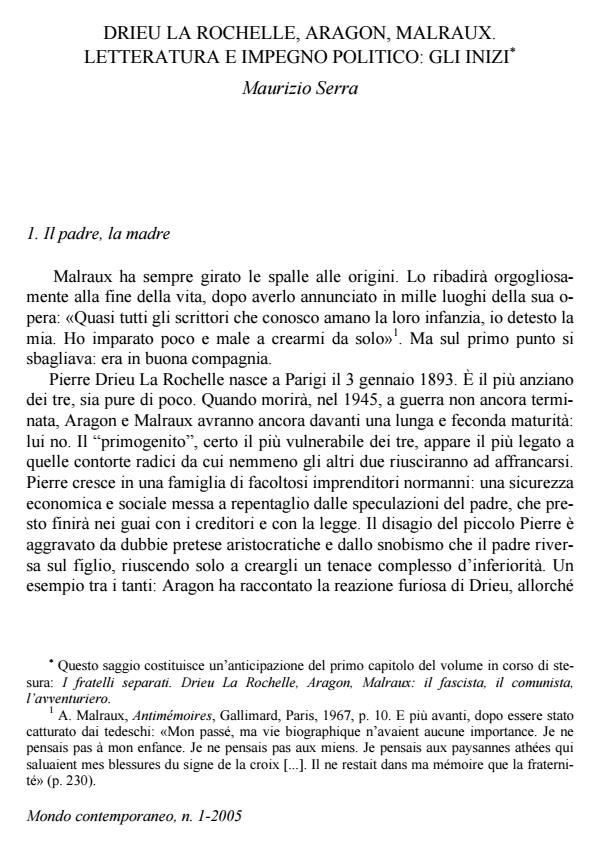 This essay deals with the origins and initial steps in the parallel evolution of three noteworthy writers and thinkers of the XXth century: the dandy turned Fascist Pierre Drieu La Rochelle; the Surrealist then militant Communist Louis Aragon and the aesthete, revolutionary and finally Gaullist minister André Malraux. Each of them represents a particular brand of the climate that transformed France between the two World Wars from the laboratory of modern thinking, as it had largely been before 1914, into the playground of conflicting ideologies shaped elsewhere: in Moscow, Rome, Berlin, and from the infant movement of liberation in South East Asia to the Spanish civil War. Heightened political activity was not a monopoly held by French intellectuals, but in the 1920s and 1930s both the extreme Right and Left increased under the pressure of totalitarian systems whose appeal shook the foundations of the Third Republic, already weakened by the toll of the Great War. Drieu, Aragon and Malraux evolved through this landscape, embodying the anxieties of their times, bringing to fruition the concept of literature engagée that is still current to-day. What makes their experien¬ce still fascinating for contemporary readers is the very close political, intellectual and emotional relationship amongst them and surrounding them. Their divergent paths were constantly interwoven with each other. Their far-reaching but often blurred vision should therefore be examined against the background of a world in the making and undoing. This is the first chapter in a lengthy study that the author has devoted to those three separate brothers and their meaning in an age like ours, only apparrently emancipated from the plight of ideologies.