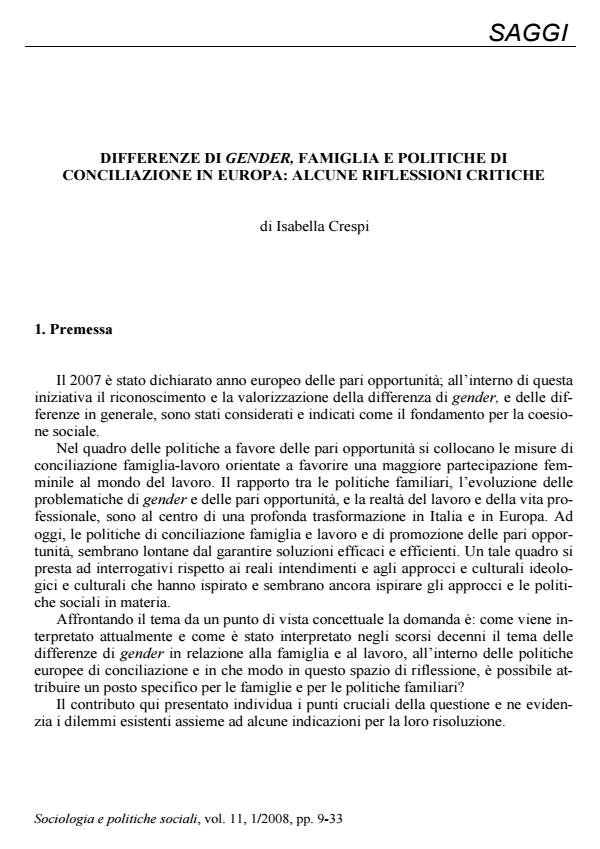 <em>Gender differences, family and reconciliation policies in Europe: some critical Aspects</em> (by Isabella Crespi) - ABSTRACT: Gender mainstreaming is the major global strategy for the promotion of gender equality. European Union has been focusing increasing attention on gender issues, and especially on considerations on the female condition. Recent developments in European countries are that more and more women are joining the labour force, birth rates are declining and social policies are mainly orienting their measures towards gender equality. Gender mainstreaming process and strategy and gender equality principle seems to become the core of every policy related to reconciliation policies, family policies and even employment ones. These problems, set within a European framework of public spending cuts, make it difficult to maintain and sustain the current type of welfare state. The paper focuses on the relation between family and gender mainstreaming to stress, if and how, the debate on the topic of reconciliation policies, family policies and gender issues are implemented in the European social policy systems. Although some significant improvements have certainly been made especially in terms of women’s emancipation, gender equity and maternity policies it should however be noticed that some fundamental issues still remain unresolved and continue to pose problems. Many studies highlight the need for a more deepened approach to gender, family and work relationship. In recent years great attention as been given to family well-being effects in workplace and to community studies. In this sense gender policies, that emphasise the importance of dialogue, practice and negotiation in the relationship among men and women/work and family/ individuals and institutions, fail in catching the specific relationality of this process. These push forward in order to consider the possibility to involve more social subjects in the redefinition of social policies facilitating work-family balance. The family is finding it difficult to face the challenges posed by the economic sphere, which is increasingly intrusive (it suffices to think of fragmented work schedules, which sometimes are in conflict with family needs) and demanding (like in the perception that the family should be subsidiary to work). The lack of attention towards family welfare results in a tendency to consider family policies as provisions to be addressed always and exclusively to individuals and not to the relationships between them. The new challenge seems to be the need to reconcile gender, family and work not only through policies but in their basic meaning for individual life; people experiences different spheres of life as an intertwined process, not artificially separable.