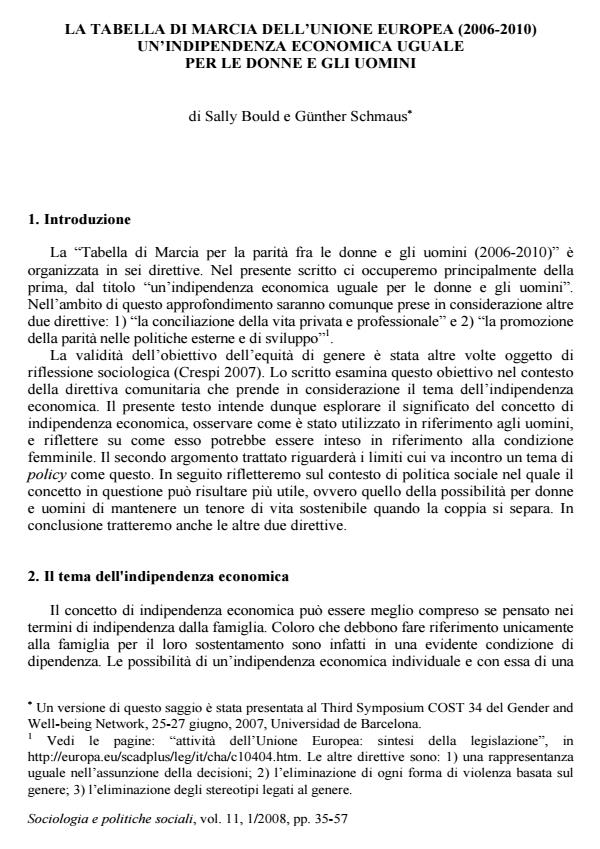 <em>European Union Roadmap (2006-2010). Equal economic independence for women and men</em> (by Sally Bould e Günther Schmaus) - ABSTRACT: This paper critically reviews the European Commission Roadmap for equality between women and men (2006-2010) and especially the concept of economic independence for women and men. Economic independence, with reference to men, needs to be put in the historical context of the development of labour markets; a man’s economic independence depended upon his ability to earn life for himself in the labour market. In addition economic independence needs to be understood in terms of family obligations and the history of marriage and divorce. As a policy goal the concept of economic independence is limited because it generally refers to an individual and does not take into account either family caregiving or the need for family care. It is less fact and more of a fiction, a fiction that ignores childhood, disability, old age as well as women’s burden of caregiving. One meaning of economic independence today is what happens to the household income of couples who split the joint household into two separate households. This research documents the vulnerability of the subsequent household of the woman in Esping-Anderson’s models of welfare as represented by France, Germany and the UK. In these countries, a separated woman can avoid a decline in her economic well-being only by repartnering. Denmark stands out as the country where gender does not have a statistically significant impact on the post-separation standard of living where there is no new partner (controlling for other relevant variables). The Roadmap also refers to the need for a reconciliation of work and family but, other than child care, it is up to the women and men themselves to work this out. Furthermore, it does not address the need for changes in the labour markets and need for changes in employer’s practices, except to caution about flexibility. The main goal here seems to be an increase in women’s workforce participation, hardly an effective way to achieve equal economic independence for women and men. The Roadmap also addresses the issues of women and work in developing countries but here the reconciliation of work and family life, and even childcare, is not discussed. There is a history of struggle by workers to make their labour market activity compatible with their family responsibility. The move to include women in labour markets has shifted the context of the worker and his family to the individual. But it is the family, not the individual, which is the appropriate unit of analysis in discussing economic well-being.