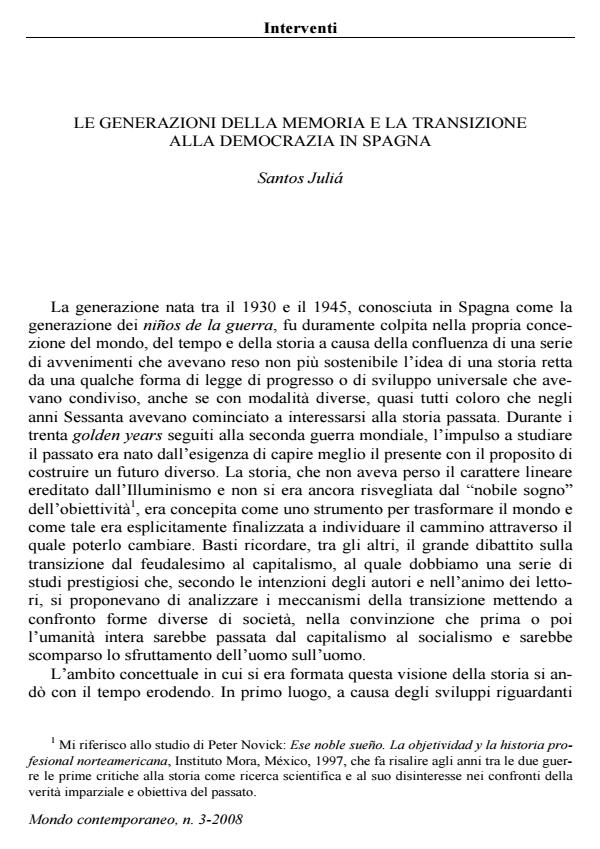 <em>The Generations of Remembrance and the Democratic Transition in Spain</em> - Seventy years have passed since the end of the Spanish Civil War and its memory has now turned into a key issue in the political and historical debate in Spain. The image of a sort of "pact of oblivion" and of a general "amnesia" are often referred to as the main features that may explain the period of transition from dictatorship to democracy, but this ignores that during those years there was a real avalanche of books, articles, memoirs and conferences on the war and its outcome. The author puts in comparison the memory of war and of Francoism which was typical of the generation that made the transition to democracy from 1975 to 1982 with the memory of the transition that was characteristic of the generation which was born during the last years of the dictatorship and the early years of democracy. Moderate Italy in the Historical Research of the Last Ten Years, Cristina Baldassini This work is a review of the main studies on Italian moderate oriented public opinion after 1945: from the works of Renzo De Felice, who was the first to describe the existence of a wide "grey zone" of the population in the two-year period between 1943 and 1945, to more recent ones that deal with moderate Italy in relation to specific memories of Fascism and the Resistance, or, in general, in relation to the judgments about the new Republican political order. The principal issues underlying the subject are then pointed out, starting from the difficulty of defining the concept of "moderate Italy" and of identifying this segment of public opinion with a precise area of political party affiliation. In this regard, the author observes how the studies that exist in the field mainly concern sector-based aspects of the phenomenon: above all anti-Communism and distrust of anti-Fascism.