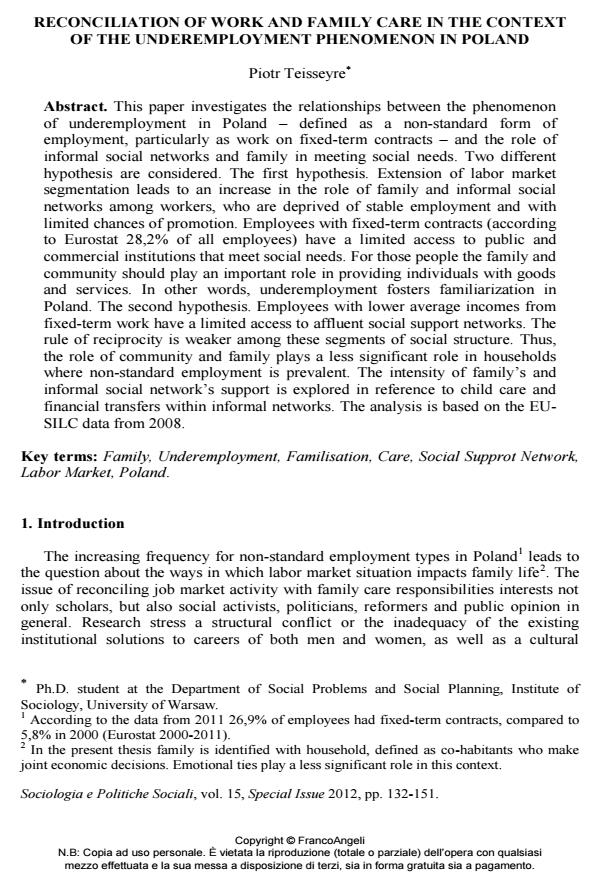 This paper investigates the relationships between the phenomenon of underemployment in Poland - defined as a non-standard form of employment, particularly as work on fixed-term contracts - and the role of informal social networks and family in meeting social needs. Two different hypothesis are considered. The first hypothesis. Extension of labor market segmentation leads to an increase in the role of family and informal social networks among workers, who are deprived of stable employment and with limited chances of promotion. Employees with fixed-term contracts (according to Eurostat 28,2% of all employees) have a limited access to public and commercial institutions that meet social needs. For those people the family and community should play an important role in providing individuals with goods and services. In other words, underemployment fosters familiarization in Poland. The second hypothesis. Employees with lower average incomes from fixed-term work have a limited access to affluent social support networks. The rule of reciprocity is weaker among these segments of social structure. Thus, the role of community and family plays a less significant role in households where non-standard employment is prevalent. The intensity of family’s and informal social network’s support is explored in reference to child care and financial transfers within informal networks. The analysis is based on the EUSILC data from 2008.