Regulating through the "Logic of Appropriateness" and the "Rhetoric of the Expert": The Role of Consultants in the Case of Intangibles Reporting in Germany 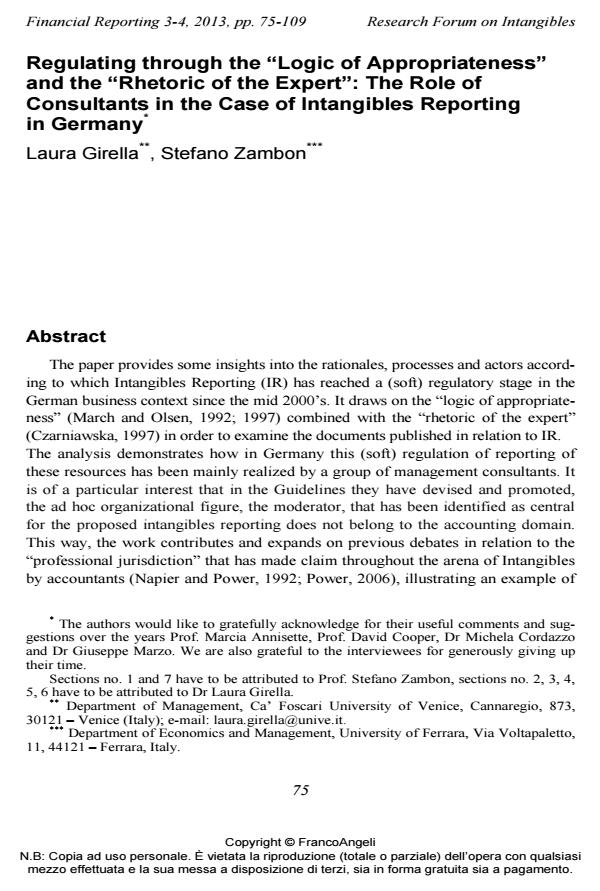 The paper provides some insights into the rationales, processes and actors according to which Intangibles Reporting (IR) has reached a (soft) regulatory stage in the German business context since the mid 2000’s. It draws on the "logic of appropriateness" (March and Olsen, 1992; 1997) combined with the "rhetoric of the expert" (Czarniawska, 1997) in order to examine the documents published in relation to IR. The analysis demonstrates how in Germany this (soft) regulation of reporting of these resources has been mainly realized by a group of management consultants. It is of a particular interest that in the Guidelines they have devised and promoted, the ad hoc organizational figure, the moderator, that has been identified as central for the proposed intangibles reporting does not belong to the accounting domain. This way, the work contributes and expands on previous debates in relation to the "professional jurisdiction" that has made claim throughout the arena of Intangibles by accountants (Napier and Power, 1992; Power, 2006), illustrating an example of an alternative site in which its professionalization and regulation can occur (Cooper and Robson, 2006). Specifically, it is suggested that the actors and the ways in which regulation is created and perpetuated have sometimes to be disentangled from the ones created within the accounting field.