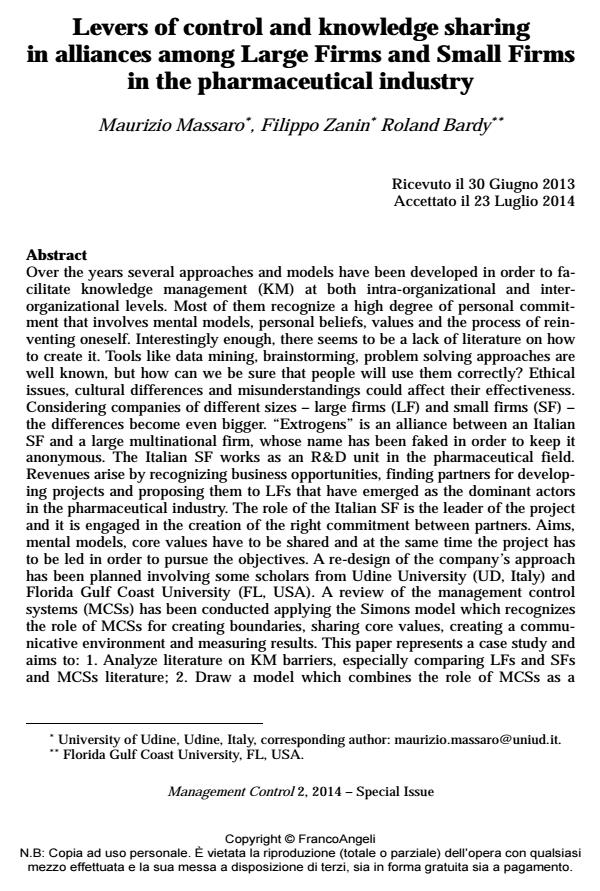 Over the years several approaches and models have been developed in order to facilitate knowledge management (KM) at both intra-organizational and interorganizational levels. Most of them recognize a high degree of personal commitment that involves mental models, personal beliefs, values and the process of reinventing oneself. Interestingly enough, there seems to be a lack of literature on how to create it. Tools like data mining, brainstorming, problem solving approaches are well known, but how can we be sure that people will use them correctly? Ethical issues, cultural differences and misunderstandings could affect their effectiveness. Considering companies of different sizes - large firms (LF) and small firms (SF) - the differences become even bigger. "Extrogens" is an alliance between an Italian SF and a large multinational firm, whose name has been faked in order to keep it anonymous. The Italian SF works as an R&D unit in the pharmaceutical field. Revenues arise by recognizing business opportunities, finding partners for developing projects and proposing them to LFs that have emerged as the dominant actors in the pharmaceutical industry. The role of the Italian SF is the leader of the project and it is engaged in the creation of the right commitment between partners. Aims, mental models, core values have to be shared and at the same time the project has to be led in order to pursue the objectives. A re-design of the company’s approach has been planned involving some scholars from Udine University (UD, Italy) and Florida Gulf Coast University (FL, USA). A review of the management control systems (MCSs) has been conducted applying the Simons model which recognizes the role of MCSs for creating boundaries, sharing core values, creating a communicative environment and measuring results. This paper represents a case study and aims to: 1. Analyze literature on KM barriers, especially comparing LFs and SFs and MCSs literature; 2. Draw a model which combines the role of MCSs a Knowledge Management Tools; 3. Present a case study where MCSs have been used to reduce KM barriers among LFs and SFs.