Flow at work in Italian journalists: differences between permanent and freelance journalists 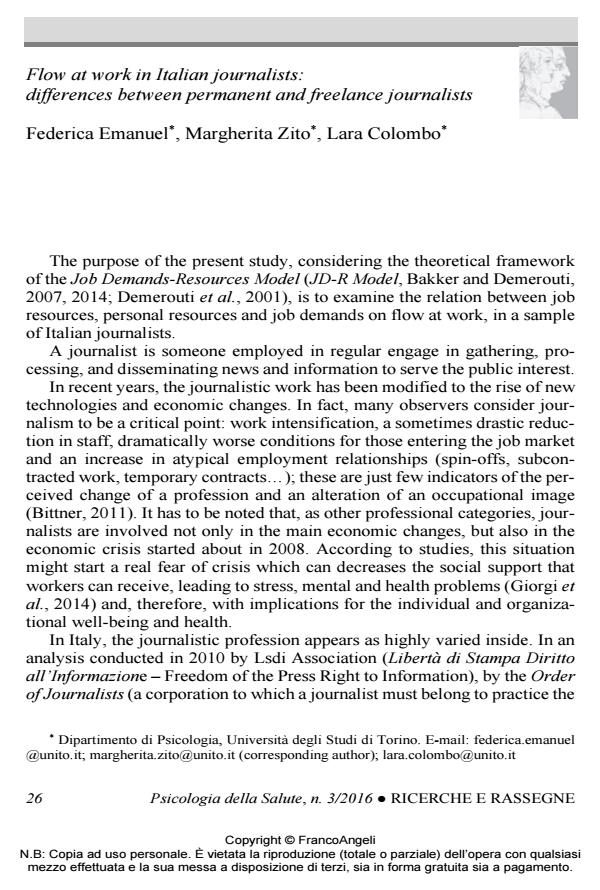 Flow is an inner experience produced by the participation in an activity in which people are immersed and enjoy it (Csikszentmihalyi, 1990). According to the Job Demands-Resources Model (Bakker and Demerouti, 2014), flow at work (FaW) occurs when job demands meet professional skills and when they are balanced by resources (Csikszentmihalyi, 2003). This study aimed to detect the relation between job resources (supervisors’ support, job autonomy), personal resources (optimism, internal locus of control) and job demands (workload, emotional dissonance) on FaW, in a sample of Italian journalists, considering differences between permanent and freelance. Participants are 260 journalists (118 permanent, 142 freelance) that filled out a self-report questionnaire. Data analysis (SPSS22) involved: descriptive statistics, Alpha reliabilities; correlations (Pearson’s r); t-test for independent samples; multiple regression. Results show differences between journalists: in permanent journalists FaW is influenced only by both job resources, in freelance journalists FaW is influenced by internal locus of control, job autonomy and workload. These results suggest a possible challenges-skills balance and a moderating effect of autonomy between workload and flow at work, to verify in the future. This study shows the importance to detect and to promote FaW in the same professional group, considering different types of task and employment contract. Promoting a positive organizational culture and FaW experiences is functional to prevent the risk of exhaustion, to improve performance and to protect the employees’ health and quality of working life.