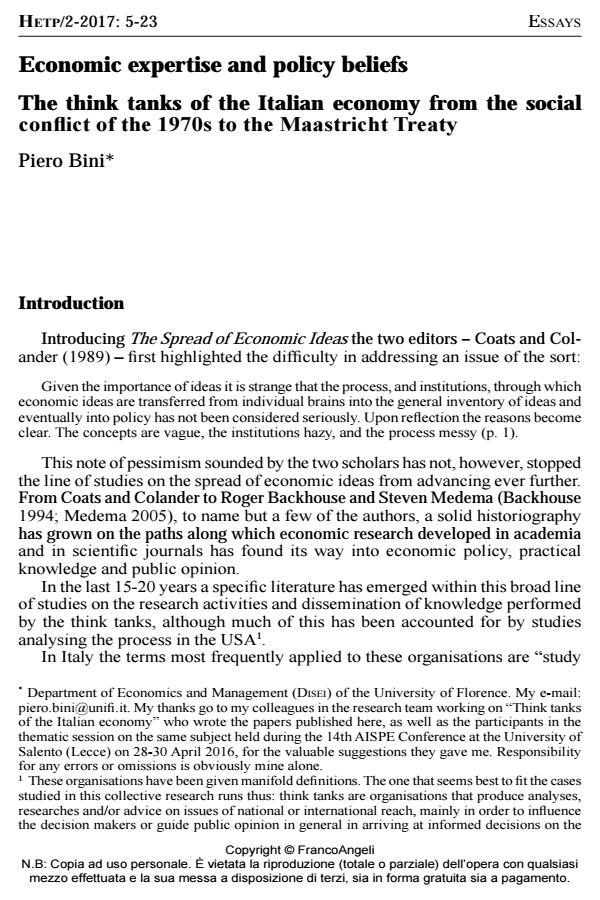 This paper explores the activities of five think tanks at work on the Italian economy during the 1970s and 1980s. They are: Cespe (Economic Policy Research Centre) and Csc (the research departement of the Confederation of Italian Industries) in the second half of the 1970s; Ceep (Economic Policy Study Center) from 1973 to 1992; Cer (Research Europe Center) from 1981 to 1992; Isel (Labour Economic Studies Institute) from 1981 to 1985. Based on the experience of these study centres, the paper considers some leading topics in the think tank’s literature, such as 1) the relationship between knowledge and power; 2) the challenging and problematic path between the economic expertise and the aspiration to influence the policy-making. In particular, the study-cases analysed show a variety of nexus between knowledge and policy, in some cases of a conflictual nature, in others of a dialectical nature, and in yet others legitimising one another. As a consequence of this focus on these 5 think tanks, some major issues of the Italian economy of that time are also brought to the attention of the reader: the ways then adopted to escape from inflation; the inability of the ruling powers to address the crisis of public finance and the soaring public debt; and the great uncertainty about the effectiveness of the quantitative parameters of the Maastricht Treaty in providing an appropriate solution for Italy. In general, the paper provides some reflections on the different guises in which economics seeks a place in public discourse.