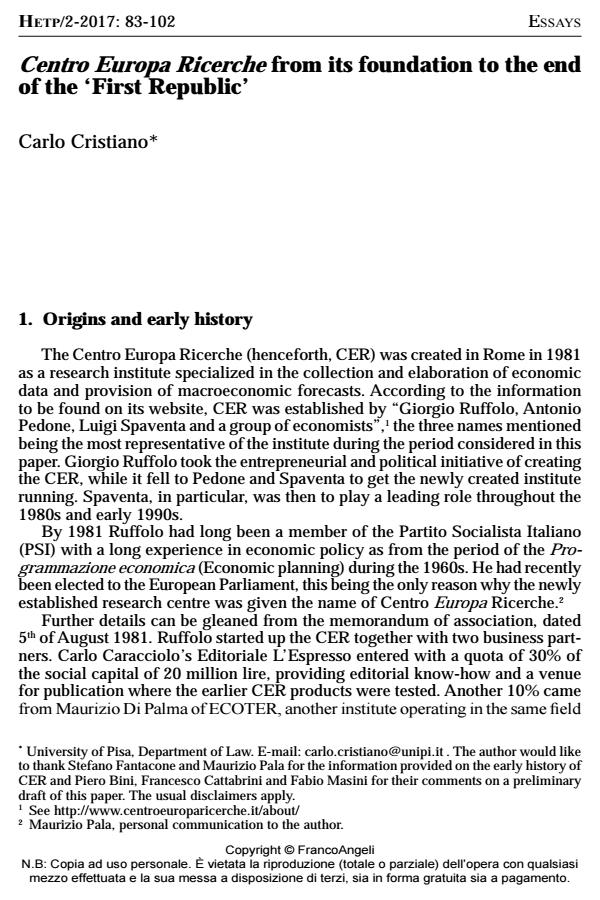 The Centro Europa Ricerche (CER) was created in Rome in 1981 by Giorgio Ruffolo in collaboration with Antonio Pedone, Luigi Spaventa and a few others. Although very close to the Partito Socialista Italiano (PSI), CER was frequently very critical of the governments in which the PSI took part. While supporting successive reforms of the scala mobile, CER was highly critical of the budgetary policy, with a rapid shift of emphasis from the insufficient and unequal revenues to the need for structural spending cuts from 1983 onwards. Parallel to this ran the analysis of Italian industries and their outlook. While pointing to slow growth of productivity and scant innovation as the main problems of Italian industry, CER lamented the lack of an industrial policy and did not share the Bank of Italy view on the effects of the central bank exchange rate management within the EMS. While the central bank considered it possible to stimulate organisational and technological innovation by means of an overvalued lira, CER denounced the negative effects of this policy on employment. At a later stage, CER also began to view the growing size of the tertiary sector with increasing concern. The situation emerging at the end of the 1980s was that workers laid off from the exporting sectors were finding employment in the less competitive tertiary sector, thus producing an upward pressure on prices which generated inflation and reduced the competitiveness of the entire economy. In response to this, CER proposed several reforms. The reforms proposed, and the arguments supporting them, to some extent anticipated the kind of reformism that would prevail at a later stage, when Italy decided to enter the EMU. However, the kind of reformism proposed at CER from 1982 to 1992 was not based on the idea that an external constraint ought to be imposed on a recalcitrant country. What CER was proposing was an autonomous process of reform, opposed to any external constraint à la Maastricht.