Alfred Binet and the psychology of testimony 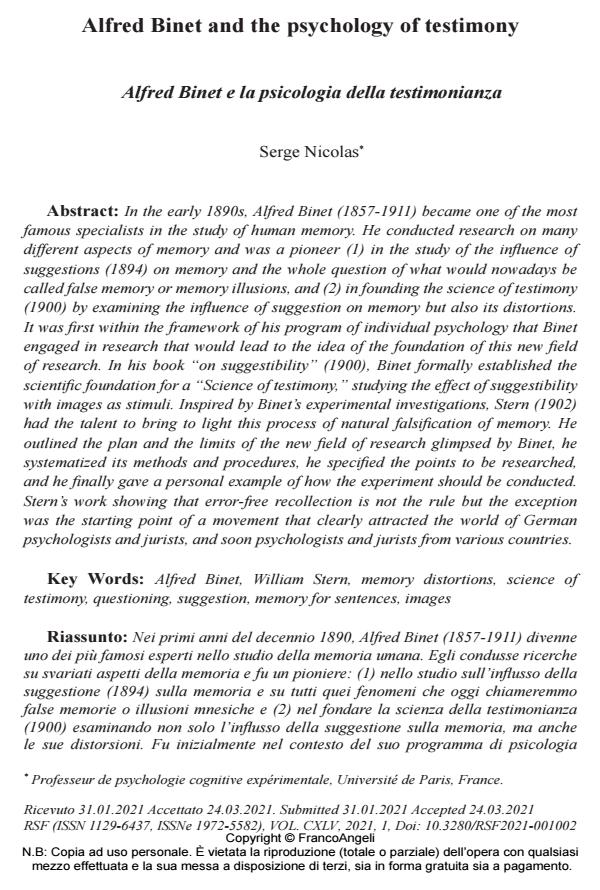 In the early 1890s, Alfred Binet (1857-1911) became one of the most famous specialists in the study of human memory. He conducted research on many different aspects of memory and was a pioneer (1) in the study of the influence of suggestions (1894) on memory and the whole question of what would nowadays be called false memory or memory illusions, and (2) in founding the science of testimony (1900) by examining the influence of suggestion on memory but also its distortions. It was first within the framework of his program of individual psychology that Binet engaged in research that would lead to the idea of the foundation of this new field of research. In his book "on suggestibility" (1900), Binet formally established the scientific foundation for a "Science of testimony", studying the effect of suggestibility with images as stimuli. Inspired by Binet’s experimental investigations, Stern (1902) had the talent to bring to light this process of natural falsification of memory. He outlined the plan and the limits of the new field of research glimpsed by Binet, he systematized its methods and procedures, he specified the points to be researched, and he finally gave a personal example of how the experiment should be conducted. Stern’s work showing that error-free recollection is not the rule but the exception was the starting point of a movement that clearly attracted the world of German psychologists and jurists, and soon psychologists and jurists from various countries.