Why testimony? Trauma, credibility, and the work of truth-telling 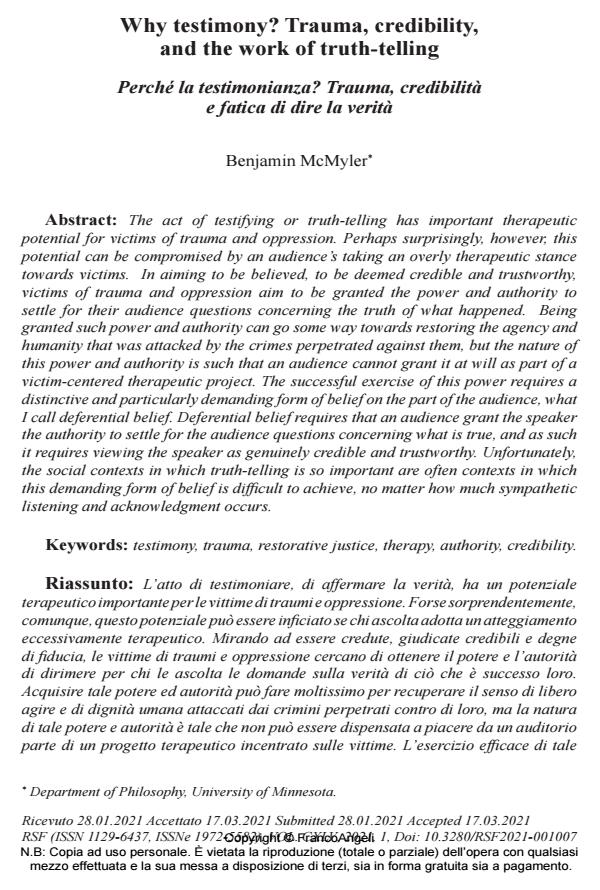 The act of testifying or truth-telling has important therapeutic potential for victims of trauma and oppression. Perhaps surprisingly, however, this potential can be compromised by an audience’s taking an overly therapeutic stance towards victims. In aiming to be believed, to be deemed credible and trustworthy, victims of trauma and oppression aim to be granted the power and authority to settle for their audience questions concerning the truth of what happened. Being granted such power and authority can go some way towards restoring the agency and humanity that was attacked by the crimes perpetrated against them, but the nature of this power and authority is such that an audience cannot grant it at will as part of a victim-centered therapeutic project. The successful exercise of this power requires a distinctive and particularly demanding form of belief on the part of the audience, what I call deferential belief. Deferential belief requires that an audience grant the speaker the authority to settle for the audience questions concerning what is true, and as such it requires viewing the speaker as genuinely credible and trustworthy. Unfortunately, the social contexts in which truth-telling is so important are often contexts in which this demanding form of belief is difficult to achieve, no matter how much sympathetic listening and acknowledgment occurs.