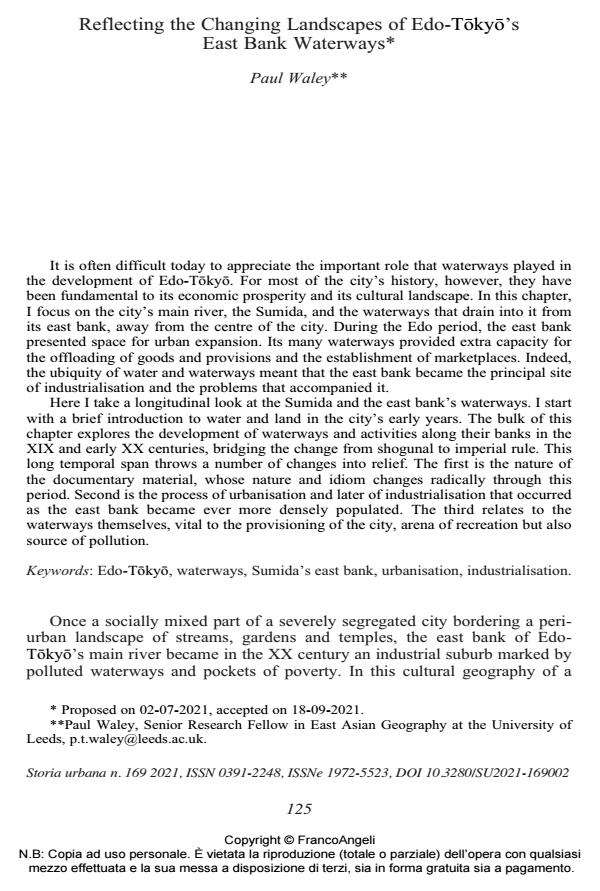 It is often difficult today to appreciate the important role that waterways played in the development of Edo-Tokyo. For most of the city’s history, however, they have been fundamental to its economic prosperity and its cultural landscape. In this chapter, I focus on the city’s main river, the Sumida, and the waterways that drain into it from its east bank, away from the centre of the city. During the Edo period, the east bank presented space for urban expansion. Its many waterways provided extra capacity for the offloading of goods and provisions and the establishment of marketplaces. Indeed, the ubiquity of water and waterways meant that the east bank became the principal site of industrialisation and the problems that accompanied it. Here I take a longitudinal look at the Sumida and the east bank’s waterways. I start with a brief introduction to water and land in the city’s early years. The bulk of this chapter explores the development of waterways and activities along their banks in the XIX and early XX centuries, bridging the change from shogunal to imperial rule. This long temporal span throws a number of changes into relief. The first is the nature of the documentary material, whose nature and idiom changes radically through this period. Second is the process of urbanisation and later of industrialisation that occurred as the east bank became ever more densely populated. The third relates to the waterways themselves, vital to the provisioning of the city, arena of recreation but also source of pollution.