Danchi and Tower Mansions. The Origin and Current Situation of Collective Housing in Tokyo: From Centre to Periphery, from Inland to Waterfront 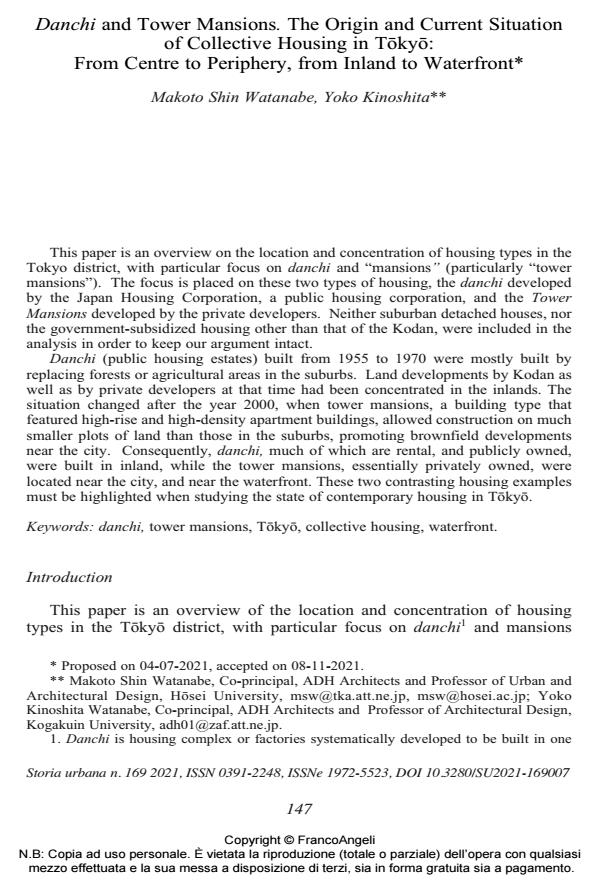 This paper is an overview on the location and concentration of housing types in the Tokyo district, with particular focus on danchi and "mansions" (particularly "tower mansions"). The focus is placed on these two types of housing, the danchi developed by the Japan Housing Corporation, a public housing corporation, and the Tower Mansions developed by the private developers. Neither suburban detached houses, nor the government-subsidized housing other than that of the Kodan, were included in the analysis in order to keep our argument intact. Danchi (public housing estates) built from 1955 to 1970 were mostly built by replacing forests or agricultural areas in the suburbs. Land developments by Kodan as well as by private developers at that time had been concentrated in the inlands. The situation changed after the year 2000, when tower mansions, a building type that featured high-rise and high-density apartment buildings, allowed construction on much smaller plots of land than those in the suburbs, promoting brownfield developments near the city. Consequently, danchi, much of which are rental, and publicly owned, were built in inland, while the tower mansions, essentially privately owned, were located near the city, and near the waterfront. These two contrasting housing examples must be highlighted when studying the state of contemporary housing in Tokyo.