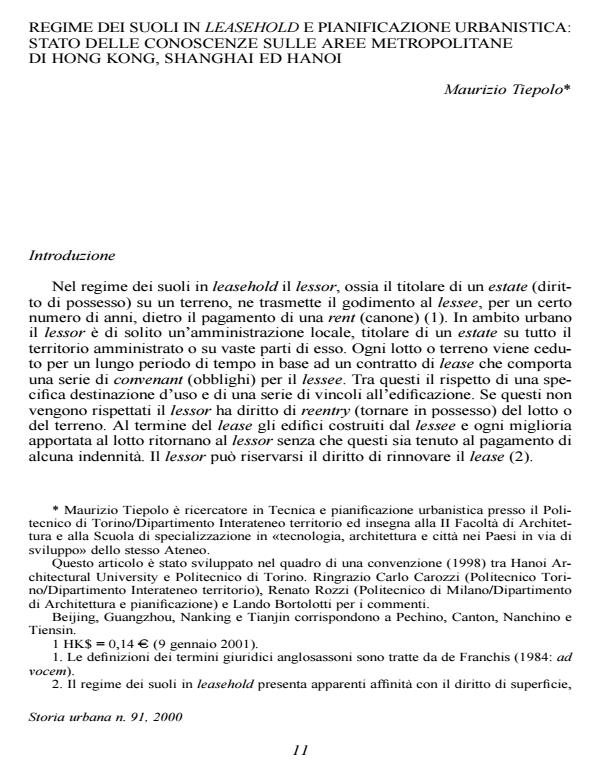 The «leasehold» is a form of land tenure in effect in many cities. At the start of the 1970s, it was often suggested for Developing Countries, because it was held that, with respect to the «freehold» system, it offered advantages in land use planning and in recovering land values. In the 1980s, this point of view changed, because, where it had been applied, the leasehold system showed that it required a high level of sophistication in the administration of leases and a high degree of integrity in the bureaucracy involved. There were found to be problems with rents tied to an inflation index, the lack of incentives in order to maintain the property, and the acceptance of the lease as collateral near the end of the lease’s term. It was also difficult to acquire the reserves of land to be leased. Conflicts between planning restrictions and the lease convenants arose, as did conflicts among municipalities to attract industry and commerce away from other more suitable locations. In Hong Kong, the leasehold was introduced in 1841. In China and Vietnam, it was adopted only recently, following the opening of these economies to the free market. With regard to the advantages and the disadvantages of the leasehold system, Hong Kong was able to control urbanization and to collect huge revenues from the sale of leases, even though it was not able either to satisfy the high demand for land or to encourage land redevelopment. Shanghai and Hanoi have leasehold systems with different characteristics, which have thus not produced the same advantages nor presented the same disadvantages. In Shanghai, the leasehold permitted the redevelopment of the CBD and generated remarkable revenues, but it did not favor the control of urbanization or the vacant plots. For the moment, Hanoi has not benefited from any of the advantages mentioned above, and, to the contrary, is experiencing different disadvantages (complex administration, conflicts between lease convenants and planning restrictions, and conflicts among municipalities to attract economic activity). These results can be explained by looking at the different circumstances in which Shanghai and Hanoi introduced the leasehold system with respect to Hong Kong. Firstly, the system was introduced when they had already reached metropolitan dimensions, whereas in most of the cases in which this form of land tenure has been successfully practiced, including Hong Kong, the introduction has come at the foundation of the city, or before the city reaches such large dimensions. Secondly, the system was introduced when there was a high demand for land that both metropolis had to satisfy in some way, even though the leasehold system was not fully operative. Thirdly, the system was introduced when there was an intense need for investment in the productive and tertiary sectors as well as an acute need for financial resources in public administration, and so leasehold was used above all as an instrument to attract and, in part, collect financial resources at the expense of improvement in land use planning.