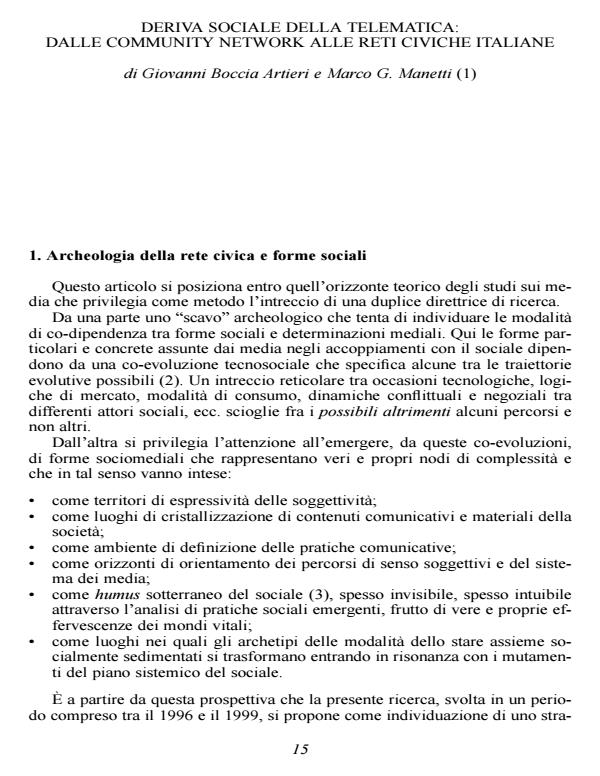 This article is part of those studies which use the combination of two guiding principles of research as a method. On one hand an archaeological "digging out" which tries to identify the ways of co-dependence between social forms and media determinations. The specific forms took by media and the connections with the society proceed from a co-evolution that specifies only a few possible trends of development. A reticular connection between technologic occasions, ways of the market, conflictual and contractual dynamics among different social actors, etc. works only in some paths. On the other hand the study of these co-evolutions of knotty socio-media forms. In this prospective the research wants to identify a "palaeographic" layer in the socio-media reality of the civic nets in Italy. The study was carried out from 1996 to 1999. The proposed pattern in order to describe the Italian phenomenon of the civic nets outlines two types, according to an evolutive research starting from the origin of the social telematics in USA. The two net-forms are: the community network created "from the base", by no profit associations, founded on the voluntary service; these networks offer free access and services (i.e. an e-mail) and self-managed areas of discussion to the citizens. The other one is the civic nets, created by the local or regional government whose first aim is the accessibility to its documents and information. This net can be considered a way of alphabetisation in telematics. In the Italian case this type is improved by "shop window" sites, created by many local government for a mere promotion of the town and its services. This form can be considered like a first layer of the evolution towards a real civic net. The research consists of the analysis of five civic nets (Firenze, Modena, Desenzano sul Garda, San Donato Milanese and Urbino) close to the proposed patterns; the analysis has been carried out through an on-line questionnaire. The result of the research is that the civic nets are not yet an effective way for human promotion considering how fast the features of the telecom-nets, and the civic nets in particular, are changeable. The civic net, as virtual/ideal representation of the town, unavoidably reflects the several subjects that operate in the different sectors (in education, work, voluntary service, entertainment). Anyway many civic nets seem to pay no attention to the participative and cooperative potential they could and should offer the citizens, because they offer nothing but more or less sophisticated information services. Most part of the Italian civic nets are "shop window" sites and this fact is little justifiable because of the increasing alphabetisation in information science and the presence of guide-lines.