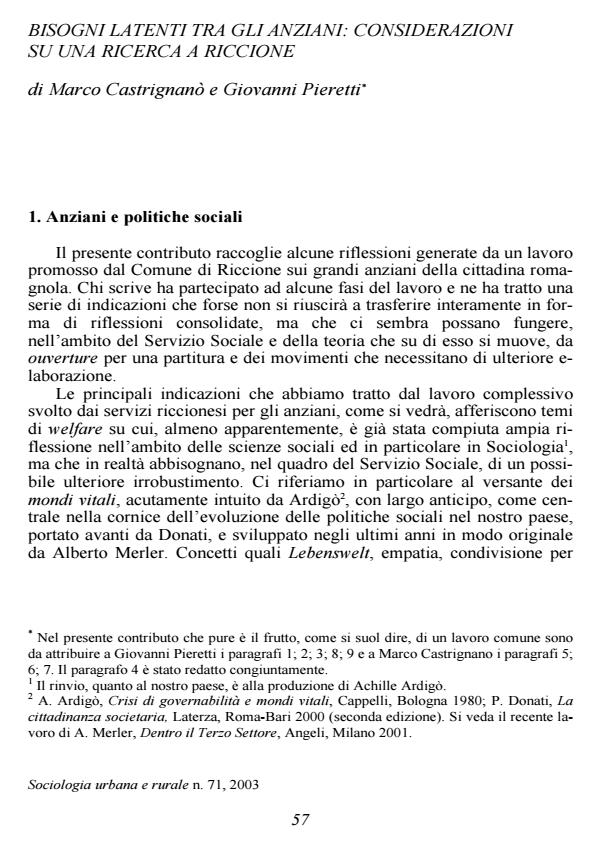 Hidden needs, i.e. those needs that though present in the territory are not per-ceived by the institutions, have become more and more a crucial issue in the pre-sent discussion going on in Italy on the aims and tasks of the social services, espe-cially after the passing of the Act 328/2000. Even if the social services addressing elderly people are in fact rather well structured if we compare them to other branches of the social services, still action here is often taken assuming that the expressed demand for services is equal to and the same as the potential demand for services. Several research works conducted in the past already proved that, in a variety of different territorial realities, this does not apply. Our essay presents the results of a research study carried out on this topic in the Municipality of Riccione. The idea upon which such work was based is that more relevance should be granted to the abstract needs of elderly people. According to this standpoint, the local gov-ernmental social services should therefore stop acting as an opposed agent with respect to the world of private associations and social cooperatives and set as a priority the following goals: first of all to reach out for those elderly citizens who do not go by themselves to the services to express their needs, and then next to figure out and link together all the resources present in the territory, giving special value to those persons who could help first read and then also answer the hidden needs of their territory, that is to say those needs for which the traditional welfare strategies of health and social assistance have proved to be no longer adequate or efficient.