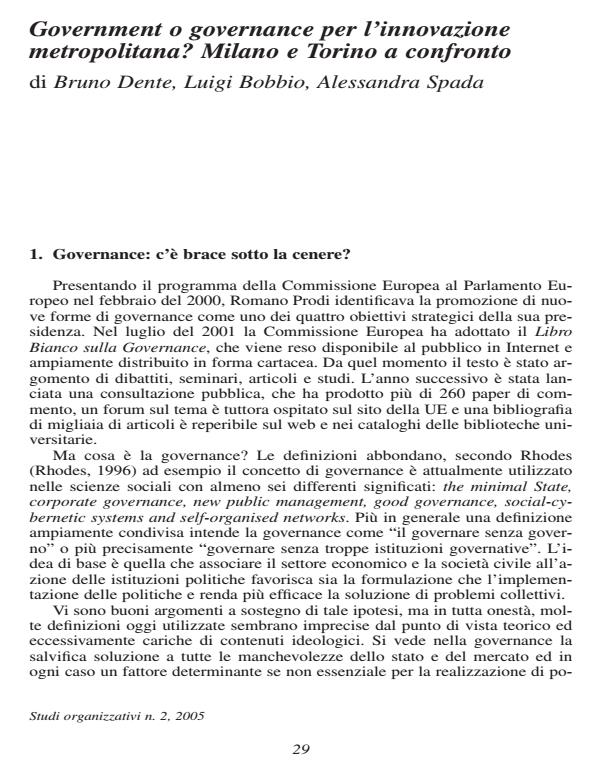 The article discusses the relationship between urban innovation and new forms of governance. Albeit the concept of governance seems to be a panacea for the cure of any sort of market or state failure, very often it is ill defined and/or ideologically loaded. However there is a growing consensus that the mobilisation of social and economic actors in governmental roles is an important, if not essential, factor, in bringing about innovative policies at least at the local scale. In our study we derive from the existing literature on social capital and institutional development the hypotheses that the more diverse are the actors involved and the more tight their linkages the better will be the innovative performance. In order to test these hypotheses we have investigated two northern Italian cities Milan and Turin that underwent in the decade 1993-2002 similar changes in the political and institutional sphere. The research carried out points out that certainly Turin had a better performance, in terms of urban innovation, than Milan and that such a result is associated with a more complex network in which different levels of government, and different types of actors, are represented. Also the tightness of the network is higher, thus providing evidence in support to the idea that policy innovation is associated with changes in the structure of governance. However, looking more in detail to the evidence collected, it appears quite clearly that Milan is much more receptive to the proposals coming from the civil society (both from the profit and the no-profit sector) while Turin, like other innovative Italian cities seems much more dependent upon the leadership of the public institutions. This poses an interesting theoretical problem: how much institutional leadership is needed in order to get good governance, more or less? Or is it possible that in order to make a better assessment of the relationship between innovation at least urban innovation and the structure of governance, one should make a distinction between short term in which more government means more innovation and the long term in which the contrary is true?