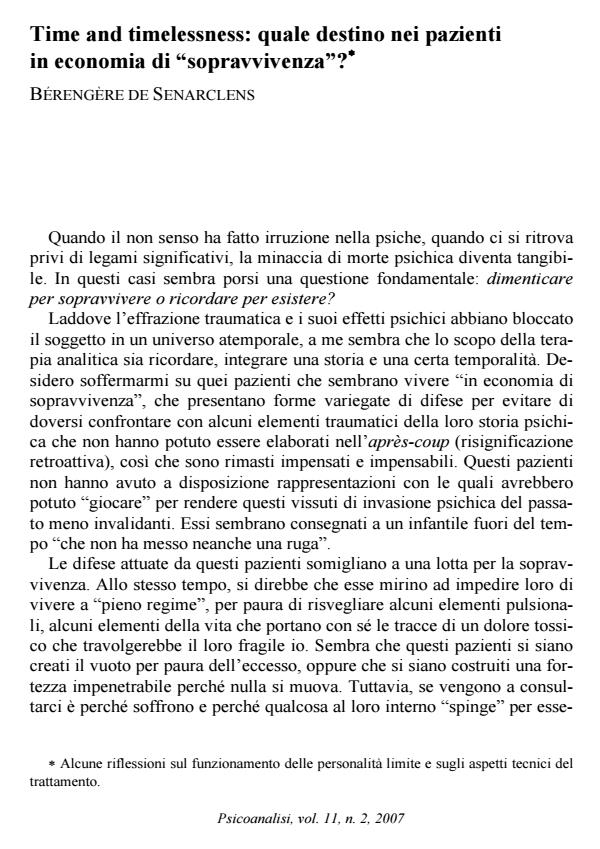 When senselessness has broken into the psyche, when there are no meaningful links, the imminent danger of psychic death becomes tangible. The fundamental question at this stage would appear to be: must we forget in order to survive or remember in order to exist? We are at the very heart of our topic: time and timelessness. The aim of the cure would be to integrate a certain temporality whereas the psychic entry of trauma and its effects place us in a timelessness. This paper concerns those patients who seem to be functioning in a survival economy mode and present multiple means of defence to avoid being confronted with the traumatic elements of their psychic history, the non thought-of, the unthinkable elements which could not be psychologically worked through. It would appear that these patients did not dispose of representations they could play with and that could have rendered these traumatic elements less damaging or incapacitating. Instead they are delivered to an infantile that remains untouched by age a sort of timeless childishness. In fact, one should speak of a global survival strategy rather than clear, stable defences. But the common denominator of these psychic states would seem to be a slowpaced life with frozen zones. Work with this type of clinical configurations has reoriented analytical technique and this article takes a closer look at a few points we feel are essential when treating these patients. Finally, we examine what happens to the analyst in such clinical situations since he also has to survive sufficiently well the fundamental challenges and permanent attacks by the patient.