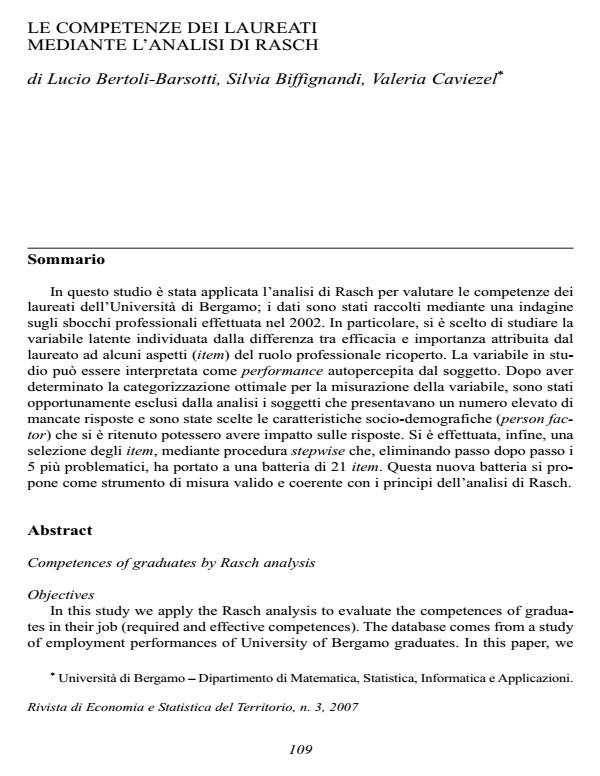 Competences of graduates by Rasch analysis (by Lucio Bertoli-Barsotti, Silvia Biffignandi, Valeria Caviezel). Objectives In this study we apply the Rasch analysis to evaluate the competences of graduates in their job (required and effective competences). The database comes from a study of employment performances of University of Bergamo graduates. In this paper, we study the latent variable which is constructed as a difference between the score attributed by the subject to the item on effectiveness and the score attributed to the importance of the corresponding item. Each item represents activities related to the job. Starting from 26 items, we want to determine a new collection as a good measurement instrument according to the Rasch analysis. Methods and Results Bearing in mind that the initial data was based on a Likert 5-point scale, the variable difference had a score ranging from 4 to +4. Recategorisation was necessary to avoid problems of ill-conditioning with the data set; optimal categorisation was determined via a Likert 4-point scale identified thus: 000123333. Subsequently, 6 sociodemographic variables were selected as person factors: degree course (Economics, Languages, Engineering), sex (male, female), graduation mark, income group, whether employee or self-employed, length of employment. The introduction of person factors allowed the collective data to be broken down into subgroups potentially reflecting a variety of response typologies (Differential Item Functioning). Subjects with a high level of missing responses, due either to effectively omitted responses or responses pertaining to the category of item not relevant, were eliminated from the original data set. Thus, 698 subjects were involved in the analysis. Having applied a stepwise selection of the items, which consisted in eliminating one item at a time, starting from the most problematic items, while observing the values indicated by the model’s goodness of fit, a new test containing 21 items was determined. The result obtained was additionally confirmed via an application of the Andersen test. Conclusions Finally, this newly determined test could have a future use in investigations aimed at assessing graduates’own perception of performance with respect to other subject groups, or within the same group or part of it, in those instances where the focus might be on a longitudinal analysis of data. Furthermore, there is potential for a least a partial use of the new test in the context of an extension of such measurements to other items and subjects (by linking design).;