Divorce and its consequences for health of families 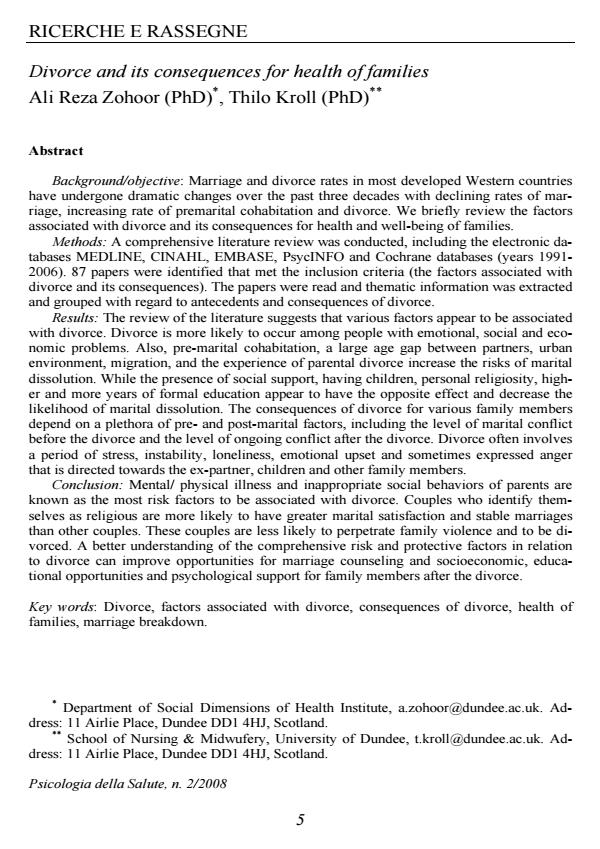 Divorce and its consequences for health of families - Background/objective: Marriage and divorce rates in most developed Western countries have undergone dramatic changes over the past three decades with declining rates of marriage, increasing rate of premarital cohabitation and divorce. We briefly review the factors associated with divorce and its consequences for health and well-being of families. Methods: A comprehensive literature review was conducted, including the electronic databases MEDLINE, CINAHL, EMBASE, PsycINFO and Cochrane databases (years 1991- 2006). 87 papers were identified that met the inclusion criteria (the factors associated with divorce and its consequences). The papers were read and thematic information was extracted and grouped with regard to antecedents and consequences of divorce. Results: The review of the literature suggests that various factors appear to be associated with divorce. Divorce is more likely to occur among people with emotional, social and economic problems. Also, pre-marital cohabitation, a large age gap between partners, urban environment, migration, and the experience of parental divorce increase the risks of marital dissolution. While the presence of social support, having children, personal religiosity, higher and more years of formal education appear to have the opposite effect and decrease the likelihood of marital dissolution. The consequences of divorce for various family members depend on a plethora of pre- and post-marital factors, including the level of marital conflict before the divorce and the level of ongoing conflict after the divorce. Divorce often involves a period of stress, instability, loneliness, emotional upset and sometimes expressed anger that is directed towards the ex-partner, children and other family members. Conclusion: Mental/ physical illness and inappropriate social behaviors of parents are known as the most risk factors to be associated with divorce. Couples who identify themselves as religious are more likely to have greater marital satisfaction and stable marriages than other couples. These couples are less likely to perpetrate family violence and to be divorced. A better understanding of the comprehensive risk and protective factors in relation to divorce can improve opportunities for marriage counseling and socioeconomic, educational opportunities and psychological support for family members after the divorce. Key words: Divorce, factors associated with divorce, consequences of divorce, health of families, marriage breakdown.;