Generational differences in response to youth offenders: myth or reality? 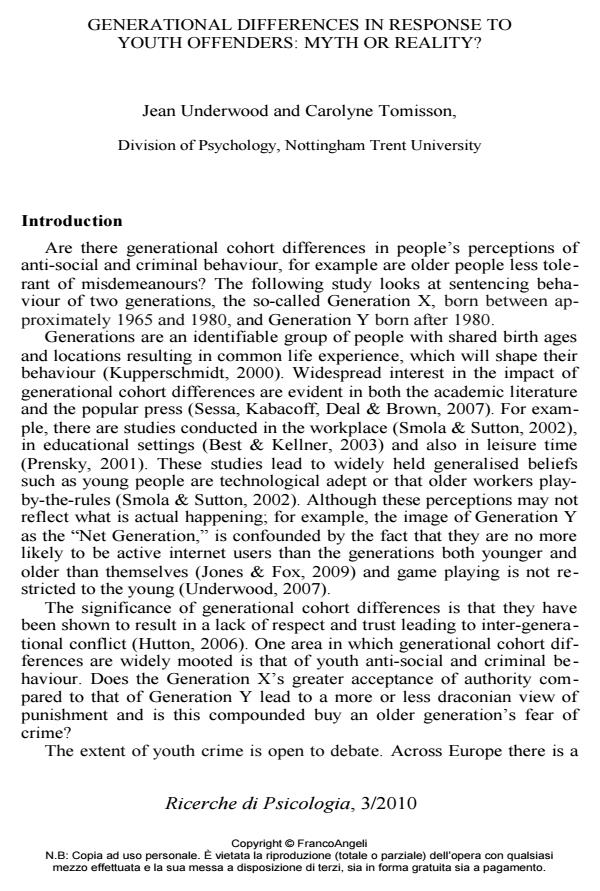 This empirical study examined generational cohort differences in perceptions of youth offending. Based on own-group bias, it was hypothesised that younger participants would be more tolerant of youth crime than the older generation, which would be shown by attitudes in favour of more lenient sentencing of offenders. Predicated on attribution theory, it was hypothesised that the provision of mitigating information about the offender would change individual’s attitudes, and in turn, behaviour towards the offender leading to less draconian sentencing. Sixty participants, divided into four groups (2 groups of 15 aged 18-24 year olds; 2 groups of 15 aged over 40) allocated appropriate sentences to offenders depicted in ten short vignettes, half were offences against the person and the remaining five were crimes against property. One younger and one older group of participants received vignettes depicting the bare facts of the offence and offender; the other two groups (one young, one older) had additional information on background of the offender. While there were no main effects of age or task, both groups viewed crimes against the person more seriously than those against property. Without additional information older participants were more punitive than younger participants as predicted by the theory of own-group bias. However, younger participants were less swayed by mitigating information than their older counterparts, with the latter awarding more lenient when such information was provided. Mitigating information about a youth offender did affect sentencing options but not with the younger participants. This has implications for the composition of juries in youth offender trials.