Ecological perspectives in anthropology. From the environmental determinism-negationism to the niche construction theory 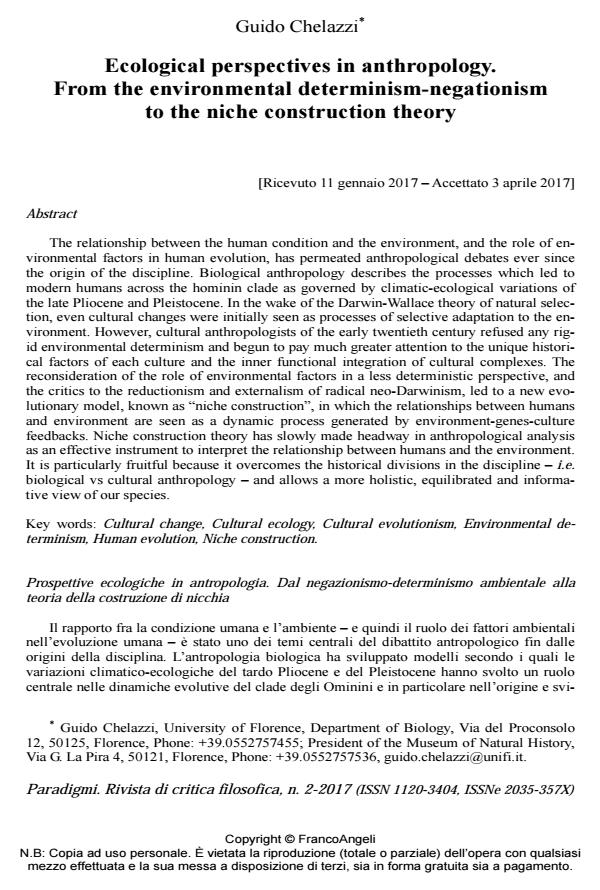 The relationship between the human condition and the environment, and the role of environmental factors in human evolution, has permeated anthropological debates ever since the origin of the discipline. Biological anthropology describes the processes which led to modern humans across the hominin clade as governed by climatic-ecological variations of the late Pliocene and Pleistocene. In the wake of the Darwin-Wallace theory of natural selection, even cultural changes were initially seen as processes of selective adaptation to the environment. However, cultural anthropologists of the early twentieth century refused any rigid environmental determinism and begun to pay much greater attention to the unique historical factors of each culture and the inner functional integration of cultural complexes. The reconsideration of the role of environmental factors in a less deterministic perspective, and the critics to the reductionism and externalism of radical neo-Darwinism, led to a new evolutionary model, known as "niche construction", in which the relationships between humans and environment are seen as a dynamic process generated by environment-genes-culture feedbacks. Niche construction theory has slowly made headway in anthropological analysis as an effective instrument to interpret the relationship between humans and the environment. It is particularly fruitful because it overcomes the historical divisions in the discipline - i.e. biological vs cultural anthropology ? and allows a more holistic, equilibrated and informative view of our species.