Paul van Zeeland and the First Decade of the US Federal Reserve System: the Analysis from a European Central Banker who was a Student of Kemmerer 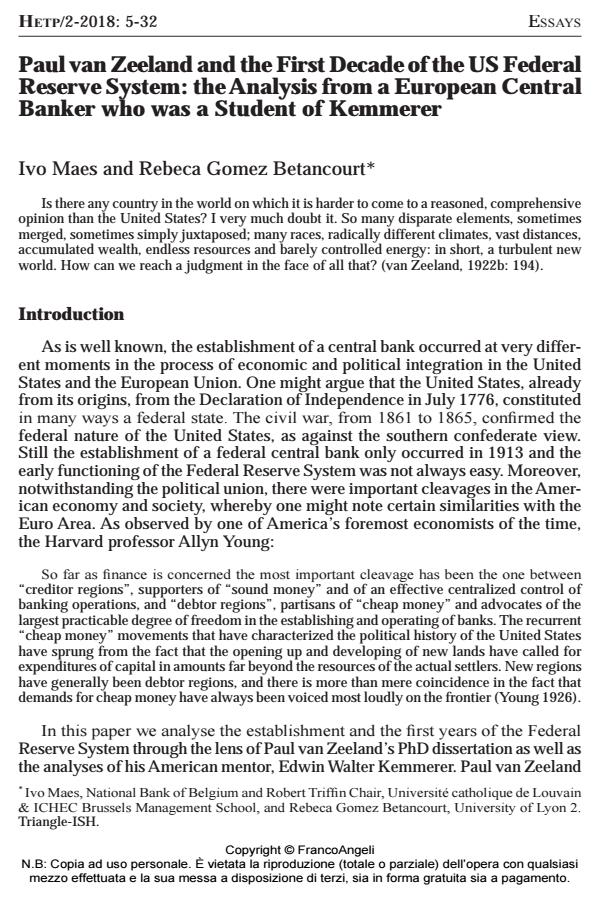 The establishment of a central bank occurred at very different moments in the process of economic integration in the United States and the European Union. In this paper, we go into the first years of the Federal Reserve System through the lens of Paul van Zeeland’s PhD dissertation. Paul van Zeeland (1893-1973) became the first Head of the Economics Service of the National Bank of Belgium in 1921, after his studies in Princeton with Edwin Walter Kemmerer. There are clear similarities in their analyses of the Federal Reserve System, for instance in their adherence to the gold standard and the real bills doctrine as well as in their emphasis on the elasticity of the money supply. Moreover, they shared a view - with hindsight a rather naïve view - that with the Fed in place, financial crises would be a distant memory. However, there were also important differences. So, van Zeeland, like several other economists as Warburg, accorded greater significance to the discount market (a key factor for the international role of the dollar) and to a stronger centralization of the Fed (which would be taken up in the 1935 Banking Act). Moreover, very specific for van Zeeland is the importance given to the Fed’s independence from the State (an element related to van Zeeland’s continental European background and Belgium’s experience of monetary financing during the war).

Ivo Maes, Rebeca Gomez Betancourt, Paul van Zeeland and the First Decade of the US Federal Reserve System: the Analysis from a European Central Banker who was a Student of Kemmerer in "HISTORY OF ECONOMIC THOUGHT AND POLICY" 2/2018, pp 5-32, DOI: 10.3280/SPE2018-002001