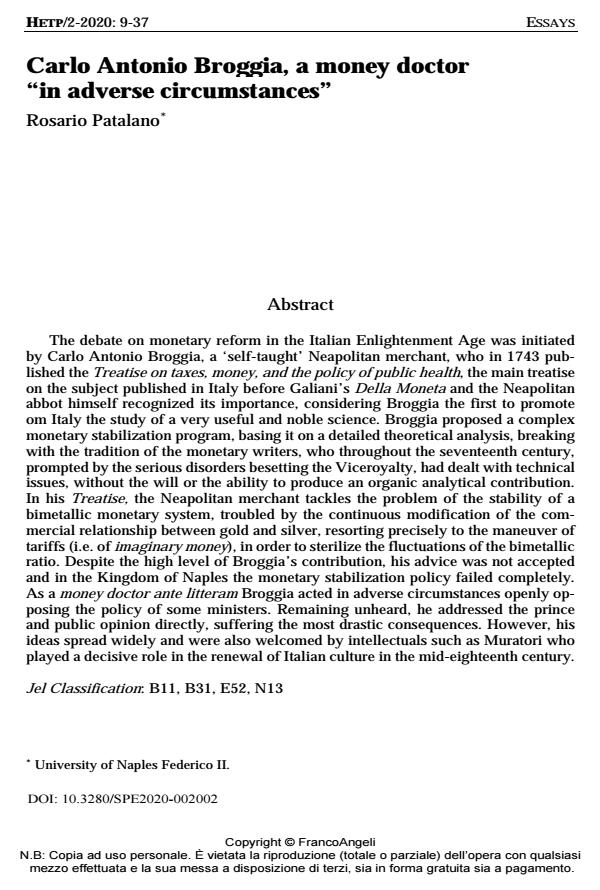 The debate on monetary reform in the Italian Enlightenment Age was initiated by Carlo Antonio Broggia, a ‘self-taught’ Neapolitan merchant, who in 1743 pub-lished the Treatise on taxes, money, and the policy of public health, the main trea-tise on the subject published in Italy before Galiani’s Della Moneta and the Nea-politan abbot himself recognized its importance, considering Broggia the first to promote om Italy the study of a very useful and noble science. Broggia proposed a complex monetary stabilization program, basing it on a detailed theoretical analysis, breaking with the tradition of the monetary writers, who throughout the seventeenth century, prompted by the serious disorders besetting the Viceroyalty, had dealt with technical issues, without the will or the ability to produce an organic analytical contribution. In his Treatise, the Neapolitan merchant tackles the prob-lem of the stability of a bimetallic monetary system, troubled by the continuous modification of the commercial relationship between gold and silver, resorting pre-cisely to the maneuver of tariffs (i.e. of imaginary money), in order to sterilize the fluctuations of the bimetallic ratio. Despite the high level of Broggia’s contribution, his advice was not accepted and in the Kingdom of Naples the monetary stabiliza-tion policy failed completely. As a money doctor ante litteram Broggia acted in adverse circumstances openly opposing the policy of some ministers. Remaining unheard, he addressed the prince and public opinion directly, suffering the most drastic consequences. However, his ideas spread widely and were also welcomed by intellectuals such as Muratori who played a decisive role in the renewal of Ital-ian culture in the mid-eighteenth century.