Sexuality and pregnancy: between taboos and disinformation 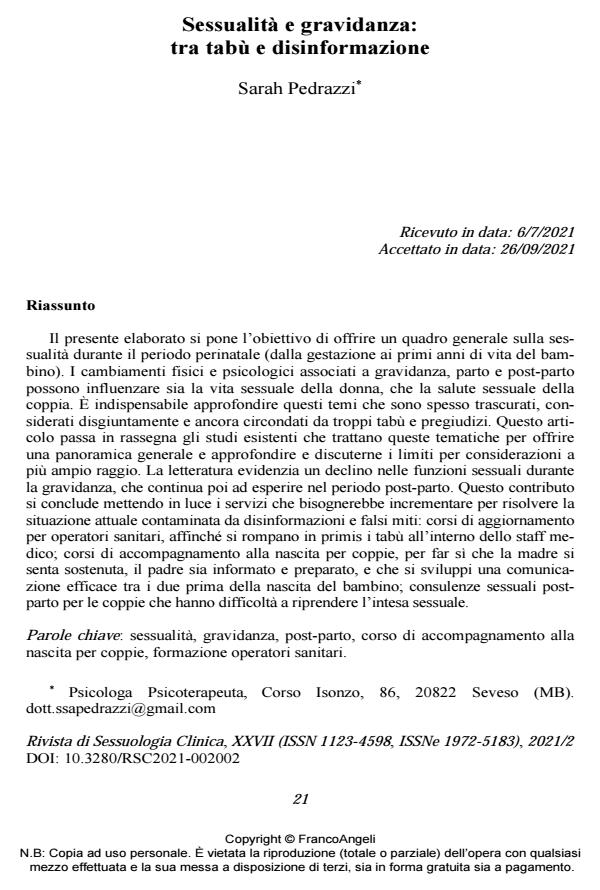 The present paper aims to offer a general picture of sexuality during the perina-tal period (from gestation to the first years of the child’s life). The physical and psychological changes associated with pregnancy, childbirth and postpartum can influence both the woman’s sex life and the couple’s sexual health. It is essential to investigate these topics that are often overlooked, considered separately and still surrounded by too many taboos and prejudices. This article reviews existing studies dealing with these topics to offer a general overview and to deepen and discuss their limits for wider considerations. The literature highlights a decline in sexual functions during pregnancy, which then continues to experience in the postpartum period. Most of the studies address the issue of sexuality in pregnancy by examining above all the female experience and highlighting the physical, hor-monal and psychological differences during the three trimesters of pregnancy (en-dogestation) but unfortunately no research deals with the analysis of the post-partum (exogestation). Furthermore, the analysis of the experience of the male partner is almost completely omitted both during pregnancy and during postpar-tum. The sexuality between the two partners, which in this period undergoes a re-duction or even an interruption, is the main theme of this study. There are still too many specialists who recommend abstinence in pregnancy, in any case, without this being supported by scientific evidence. This generates an atmosphere of un-founded fears and anxieties, which undermine the unity of the couple, in a such delicate and special moment, in which a healthy sexual activity would be the cor-nerstone for maintaining a good relationship in the couple and to prevent and pro-tect the future of the family. It is therefore essential that couples are accompanied by professionals prepared to answer their questions related to sexuality, in order to clarify, without taboos, the many perplexities on an such intimate and complex issue. It is essential to consider the modality of sexual intercourse of each specific couple before pregnancy, in order to be able to speak of decline, normality or pa-thology in post-partum. It is essential to encourage open and sincere communica-tion between partners, rather than dictating general rules, based on false myths, which influence the frequency, spontaneity or even block sexuality during preg-nancy and puerperium. In order to generate by default the natural rapprochement between the two partners, it is necessary to involve the father by structuring the birth accompani-ment courses for couple, so that not only the psychological experiences of the mother are explained, but also those of the future father. Giving proper attention to both would represent a revolution that would help to prevent serious problems such as postpartum depression or the increase in divorces (a phenomenon most frequently encountered within the first three years of the child’s birth). This contri-bution also wants to make clear the similarity between the sexual act and the childbirth, which are events influenced by the same identical hormones (oxytocin, endorphins, adrenaline, etc.), which are very sensitive to the context and the envi-ronment. In fact the more or less pleasant outcome of the sexual encounter or of the experience of childbirth derives from the hormonal combination. An unpro-cessed traumatic birth brings with it negative consequences on sexual intercourse in the postpartum. This is why adequate pre-birth training, combined with post-partum sexual counseling, are essential for the support of the two partners, so that they do not feel abandoned to themselves and lacking in communication tools. In conclusion, these are the services that should therefore be increased to resolve the current situation, which is contaminated by misinformation and false myths: re-fresher courses for health professionals, so that taboos of medical staff are bro-ken; birth accompaniment courses for couples, to ensure that the mother feels supported, the father is informed and prepared and that effective communication develops between the two before the birth of the child; post-partum sexual coun-seling for couples who have difficulty resuming sexual understanding. Birth is a crucial moment for the development of the ability to love, so the commitment and willingness to know everything around it represents a fundamental help both for couples and for future generations.