Bodily and Emotional Activation in Pain: Bridging Neurosciences and Gestalt Therapy to Understand the Therapist’s Wish for Help 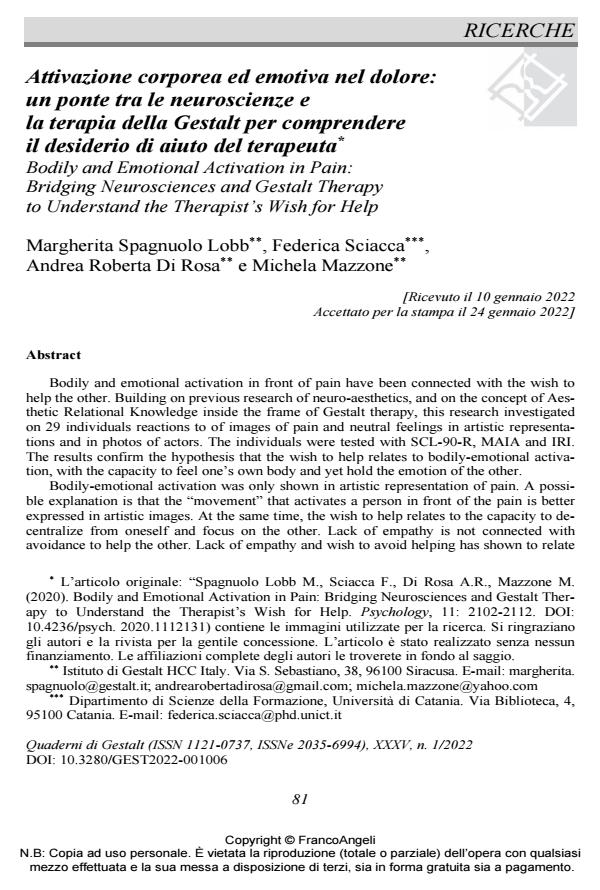 Bodily and emotional activation in front of pain have been connected with the wish to help the other. Building on previous research of neuro-aesthetics, and on the concept of Aesthetic Relational Knowledge inside the frame of Gestalt therapy, this research investigated on 29 in-dividuals reactions to of images of pain and neutral feelings in artistic representations and in photos of actors. The individuals were tested with SCL-90-R, MAIA and IRI. The results confirm the hypothesis that the wish to help relates to bodily-emotional activation, with the capacity to feel one’s own body and yet hold the emotion of the other. Bodily-emotional activation was only shown in artistic representation of pain. A possible explanation is that the "movement" that activates a person in front of the pain is better ex-pressed in artistic images. At the same time, the wish to help relates to the capacity to de-centralize from oneself and focus on the other. Lack of empathy is not connected with avoid-ance to help the other. Lack of empathy and wish to avoid helping has shown to relate to a feeling of anxiety and mistrust in coping, rather than with lack of empathy. Looking at Gestalt epistemology - based on phenomenology, aesthetics and the experiential field (Perls et al., 1951; Spagnuolo Lobb, 2019), we can conclude that this investigation has confirmed the hy-pothesis that the desire to help the other is connected with an embodied dimension that ex-presses the ability to activate oneself, to feel one’s own body and to allow oneself to be crossed by the emotion of the other, containing it, as underlined by the concept of empathy in "Aesthetic Relational Knowledge" (Spagnuolo Lobb, 2018). When empathy, understood here as feeling the other's pain (emotional-body activation), is felt most strongly in the body and there is an ability to decentralize from concern for oneself, then the person experiences a ten-sion toward the other, manifesting a desire for help.