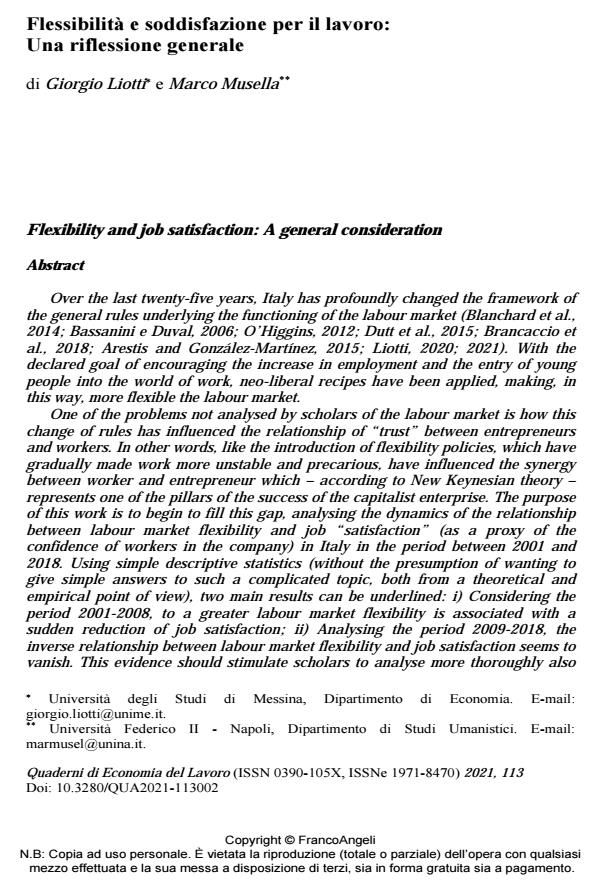 Over the last twenty-five years, Italy has profoundly changed the framework of the general rules underlying the functioning of the labour market (Blanchard et al., 2014; Bassanini e Duval, 2006; O’Higgins, 2012; Dutt et al., 2015; Brancaccio et al., 2018; Arestis and González-Martínez, 2015; Liotti, 2020; 2021). With the declared goal of encouraging the increase in employment and the entry of young people into the world of work, neo-liberal recipes have been applied, making, in this way, more flexible the labour market. One of the problems not analysed by scholars of the labour market is how this change of rules has influenced the relationship of "trust" between entrepreneurs and workers. In other words, like the introduction of flexibility policies, which have gradually made work more unstable and precarious, have influenced the synergy between worker and entrepreneur which - according to New Keynesian theory - represents one of the pillars of the success of the capitalist enterprise. The purpose of this work is to begin to fill this gap, analysing the dynamics of the relationship between labour market flexibility and job "satisfaction" (as a proxy of the confidence of workers in the company) in Italy in the period between 2001 and 2018. Using simple descriptive statistics (without the presumption of wanting to give simple answers to such a complicated topic, both from a theoretical and empirical point of view), two main results can be underlined: i) Considering the period 2001-2008, to a greater labour market flexibility is associated with a sudden reduction of job satisfaction; ii) Analysing the period 2009-2018, the inverse relationship between labour market flexibility and job satisfaction seems to vanish. This evidence should stimulate scholars to analyse more thoroughly also other issues related to flexibility: it is a question, for example, not only of studying in greater depth the abstract relationship between labour market flexibility and job satisfaction, but also of investigating the economic, social and political factors that are the basis of the dynamic change in the trend in the two different periods considered and, also, for example, to understand the impact on productivity.