The impossible freedom. Information and political power in Egypt (1922-1955) 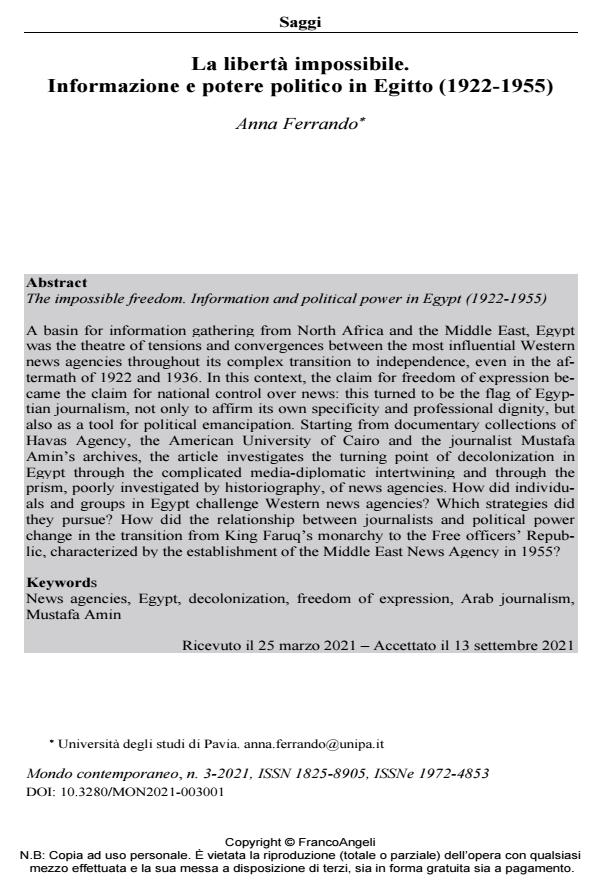 A basin for information gathering from North Africa and the Middle East, Egypt was the theatre of tensions and convergences between the most influential West-ern news agencies throughout its complex transition to independence, even in the aftermath of 1922 and 1936. In this context, the claim for freedom of expression became the claim for national control over news: this turned to be the flag of Egyptian journalism, not only to affirm its own specificity and professional digni-ty, but also as a tool for political emancipation. Starting from documentary collec-tions of Havas Agency, the American University of Cairo and the journalist Mus-tafa Amin’s archives, the article investigates the turning point of decolonization in Egypt through the complicated media-diplomatic intertwining and through the prism, poorly investigated by historiography, of news agencies. How did individu-als and groups in Egypt challenge Western news agencies? Which strategies did they pursue? How did the relationship between journalists and political power change in the transition from King Faruq’s monarchy to the Free officers’ Repub-lic, characterized by the establishment of the Middle East News Agency in 1955?