Gino Germani, Renzo De Felice and the interpretations of Fascism since the Sixties 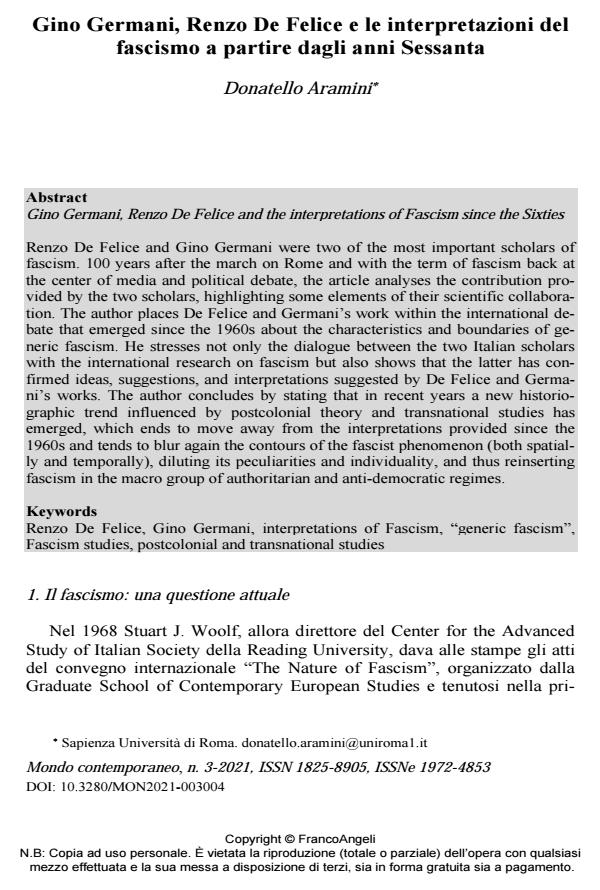 Renzo De Felice and Gino Germani were two of the most important scholars of fascism. 100 years after the march on Rome and with the term of fascism back at the center of media and political debate, the article analyses the contribution pro-vided by the two scholars, highlighting some elements of their scientific collaboration. The author places De Felice and Germani’s work within the international debate that emerged since the 1960s about the characteristics and boundaries of generic fascism. He stresses not only the dialogue between the two Italian scholars with the international research on fascism but also shows that the latter has con-firmed ideas, suggestions, and interpretations suggested by De Felice and Germani’s works. The author concludes by stating that in recent years a new historio-graphic trend influenced by postcolonial theory and transnational studies has emerged, which ends to move away from the interpretations provided since the 1960s and tends to blur again the contours of the fascist phenomenon (both spatially and temporally), diluting its peculiarities and individuality, and thus reinserting fascism in the macro group of authoritarian and anti-democratic regimes.