The Role of Professionalization and Managerialization in Family Business Succession 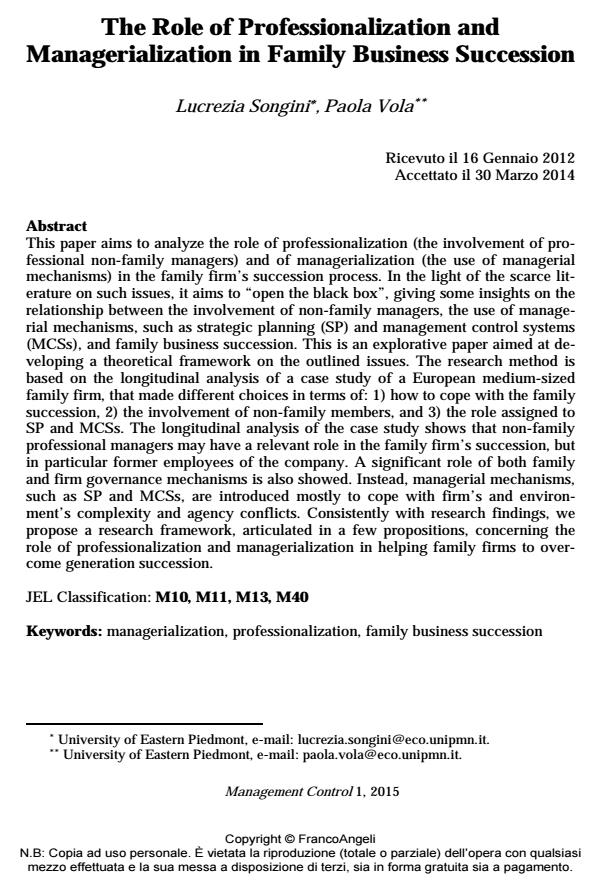 This paper aims to analyze the role of professionalization (the involvement of professional non-family managers) and of managerialization (the use of managerial mechanisms) in the family firm’s succession process. In the light of the scarce literature on such issues, it aims to "open the black box", giving some insights on the relationship between the involvement of non-family managers, the use of managerial mechanisms, such as strategic planning (SP) and management control systems (MCSs), and family business succession. This is an explorative paper aimed at developing a theoretical framework on the outlined issues. The research method is based on the longitudinal analysis of a case study of a European medium-sized family firm, that made different choices in terms of: 1) how to cope with the family succession, 2) the involvement of non-family members, and 3) the role assigned to SP and MCSs. The longitudinal analysis of the case study shows that non-family professional managers may have a relevant role in the family firm’s succession, but in particular former employees of the company. A significant role of both family and firm governance mechanisms is also showed. Instead, managerial mechanisms, such as SP and MCSs, are introduced mostly to cope with firm’s and environment’s complexity and agency conflicts. Consistently with research findings, we propose a research framework, articulated in a few propositions, concerning the role of professionalization and managerialization in helping family firms to overcome generation succession.