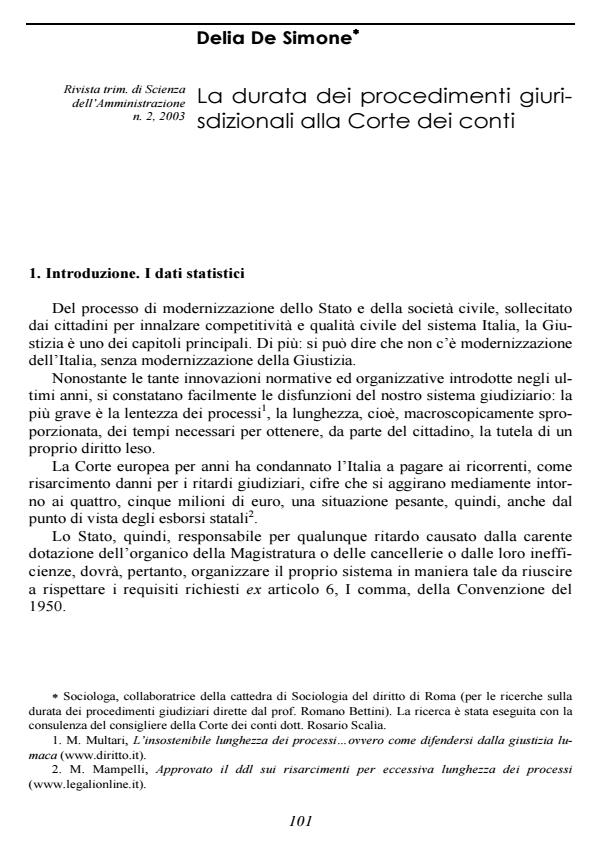 The problem of the duration of the jurisdictional proceedings is of the great actuality and has been object of study and of sociological analysis in several fields: civil, penal and administrative. The research on the jurisdictional proceedings of the Auditing Department clarify and verify the situation of the account magistracy. It has taken the movements from the Auditing Department, that institutionally collects the statistical data, and elaborates them to the aims of the inner control. The elaboration of the data on the base of specific index, for fields and for geographic areas, has evidenced, for the activity of the «Procure», for the judicial accounts and for the pension administrative-accountant jurisdiction a trend in increase of the medium lying (equal approximately to 3 years) to forehead of a number of proceedings introduced medium in lessening and a number of final pendants in increase in several the fields. Acquired such data We have been thought opportune also to estimate, through one appropriate questionary, the perception that the magistrates of the Auditing Department had relatively to the duration of the jurisdictional proceedings of competence of own office and therefore to find, in presence of unreasonable times, eventual proposals of solution. The research has moved on a mostly exploratory slope. The territorial context has been limited to the various regional jurisdictional sections and «Procure» of the Auditing Department. The outcome have confirmed the result of sociological analyses also for other judicial fields: deficiency of human resources and tools, insufficient quality of the substantial laws and normative change too much express, insufficient managerial culture, deficiency of inner controls. We are outlined, also for the jurisdictional field of the Auditing Department, the remedies individualized in previous studies: legislative and organizational reforms, control of the normative change, improvement of the quality of the norms, systematic monitoring, deontologic production formalization of operators and of the relatives controls, introduction of informatics and telematics instruments such as the telematic process. The computer science technologies cannot resolve the problem alone if they are not supported from one new managerial culture founded on the programming for objective, on the measurement of risults and with consequent rationalization of the costs. The excessive duration of the jurisdictional proceedings is shaped like denied justice. It’s for this reasons that the reduction of times and cost of the processes constitute one political priority of the Minister Castelli in the general directive on the administrative activity and on the management for year in course in order to satisfy the requirement of justice which synthesis between the fundamental rights of the citizens to the emergency and guarantees.;