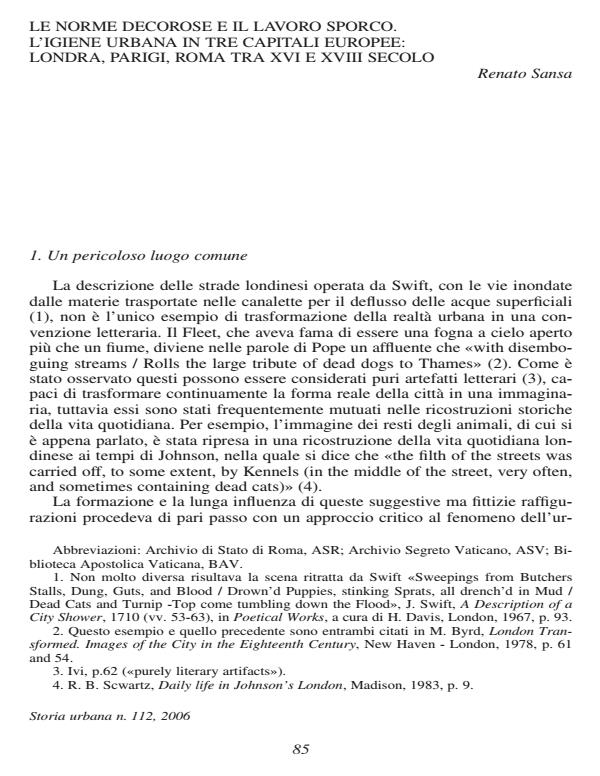 «Monstrous city», «great wen», «painted sepulchre» and other similar expressions were usually adopted to describe European cities throughout early modern history. Defoe in England, Rousseau in France and many others could be quoted as evidence of contemporary concerns about the seemingly uncontrollable city. In contrast to these visions of urban depravity was a sense of smaller communities like the village as a counter-model of sound order and relative sanity. The manner in which such contemporaries conceptualised their social and environmental problems has had a profound influence on the way that modern historians have interpreted the development of towns. Although it’s commonly assumed that the action of early modern city governments was ineffectual to maintain a clean environment, a deeper scrutiny of documentary sources reveal that contemporaries showed an appreciation of the health risk that overcrowding posed. Stench, which according to miasma-humoral theory was believed to be a principal cause of disease, was strictly associated with plague and other illness. Prompted by frequent outbreaks of plague, olfactory vigilance played a central role in regulating towns from the discrimination against poor immigrants and beggars, to the shaping of the city and better sanitation. In this article it will be argued that combating stench was an important task in the mind of municipal governors most notably, to tame plague and its myriads disorder. Despite the close association of urban squalor, filth and disease, frequent complaints about negligence in tackling these problems were made, and, as a result, new institutions and strategies were devised to clean the cities. A comparative study of major European cities (London, Paris, Rome) can help us to better understand how civic sanitation schemes operated in the past, the principal concerns behind these schemes, and the obstructions to their successful implementation.;