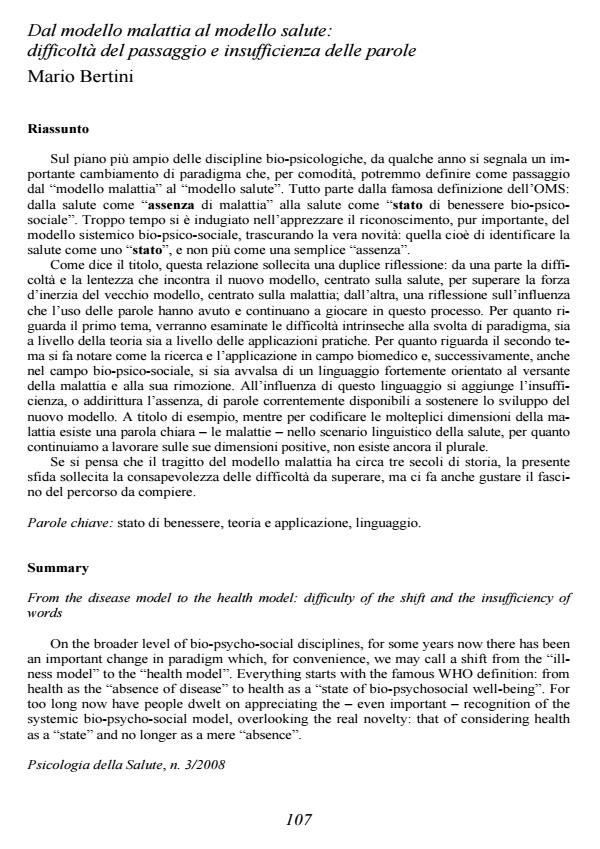 From the disease model to the health model: difficulty of the shift and the insufficiency of words - On the broader level of bio-psycho-social disciplines, for some years now there has been an important change in paradigm which, for convenience, we may call a shift from the "illness model" to the "health model". Everything starts with the famous WHO definition: from health as the "absence of disease" to health as a "state of bio-psychosocial well-being". For too long now have people dwelt on appreciating the even important recognition of the systemic bio-psycho-social model, overlooking the real novelty: that of considering health as a "state" and no longer as a mere "absence". As the title suggests, this paper calls for a dual reflection: on the one hand, the difficulty and sluggishness that the new model, focusing on health, faces in order to overcome the force of inertia of the old model, which focuses on disease; on the other, a reflection on the influence that language has had and continue to have in this process. As regards the first aspect, the difficulties inherent in the change of paradigm will be examined both at a theoretical and practical level. With regard to the second aspect, it must be noted how research and application in the biomedical field and then later also in the bio-psycho-social field has used a kind of language strongly focusing on disease and on its removal. To this linguistic influence must be added the insufficiency, or indeed absence, of words currently available to support the development of the new model. For example, while there is a specific word to codify the many spheres of illness, and namely "illnesses", in the linguistic scenario of health, although we continue to work on its positive dimensions, there is still no plural form. If we consider that the disease model has been around for about three hundred years, the current challenge prompts an awareness of the difficulties to be overcome, and also gives us an insight into the fascinating road ahead. Key words: well-being state, theory and application, language.;