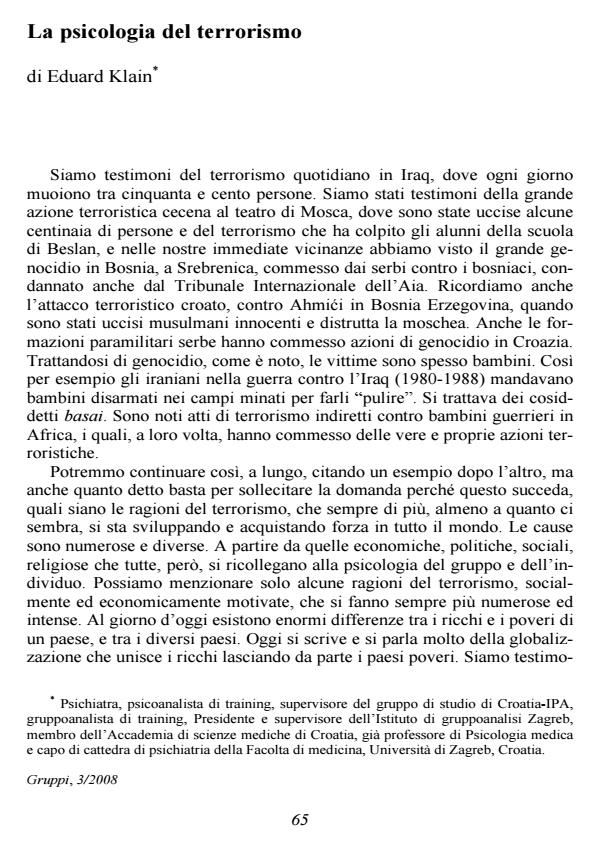 Psychology of terrorism - Unfortunately, terrorism is an everyday thing in today’s world. There are many reasons for terrorism and they are very complex: psychological, sociological, economic, etc. Man, unfortunately, needs an enemy as well as a friend, an enemy that he needs for the projection and projective identification of his own destructive aggressiveness. All of this is being transferred to small and large groups which form homogeneous assemblages based on religious, tribal, or national types, demonizing opposite groups. Medina defined terrorism as a sudden violent attack that threatens the life and welfare of human beings and aims at the defenseless victim. Basic aims of terrorism are to create panic and constant fear by repeating sudden, unpredictable attacks; often its goal is revenge, which in turn arouses the same desire for revenge in the victim, so that the terrorist himself appears to be the ultimate victim. Aims are also permanent demoralization of the victim and intergenerational transmission of fear, hopelessness, shame and hate. The media, especially television, stimulates destructive aggression in victims by awakening in them the most regressive instincts, which are projected onto the enemy. The media stimulate immature personalities to identify with terrorist - heroes. There is no psychology that is peculiar to suicide bombers: the most common terrorists of today. The first suicide bombers were Palestinians recruited from poor and traumatized families, educated in isolated camps. They were promised they would go to heaven, where they would enjoy food, drink and virgins. The terrorists who struck the Twin Towers in New York were educated, fanatically religious family people. The main question is whether we can defend ourselves from terrorism, and what future prospects await us. It is difficult to believe that terrorism will be eliminated in the near future, because there are a number of reasons for its existence.