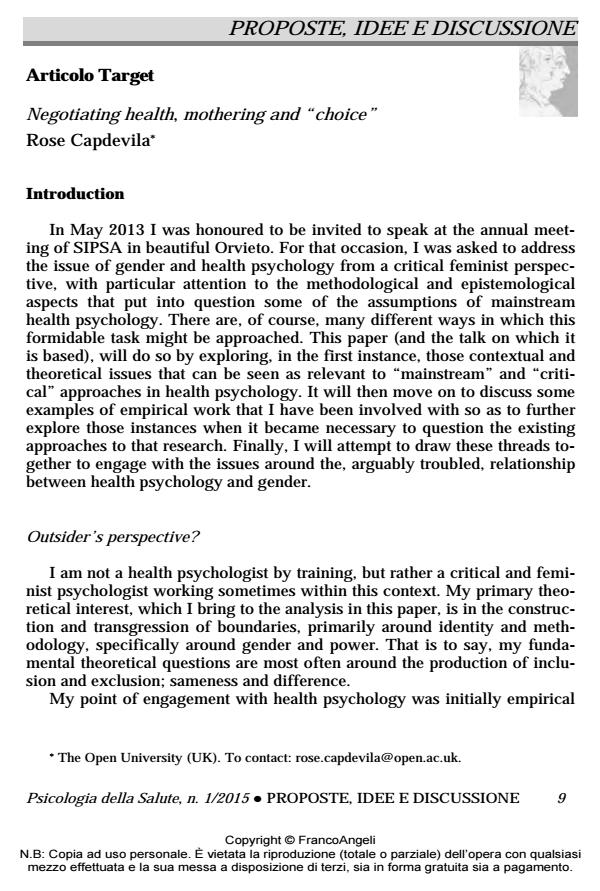 The aim of this paper is to explore constructions of gender and mothering within the context of health psychology. The paper takes an explicitly critical feminist perspective to highlight issues around some of the assumptions of mainstream health psychology. It begins by exploring the theoretical issues around the conceptualisation of health as individualised and quantifiable. Two empirical studies on the experiences of mothers of young children, that I have been involved with, are then described and used to illustrate the practical implications of this conceptualisation. The first study, on post pregnancy body image, was able to identify narratives that do not unduly problematize, or pathologize, body image in pregnancy or post pregnancy. This approach thus offers mothers new, and more affirmative, ways of understanding their own experiences. The second study, which focused on mothers’ decision making in relation to childhood immunisation, found that mothers often draw on everyday processes, practices and relationships to explain their choices. The result of these processes was that immunization became a largely mundane and compliant activity rather than reflexive consumers of healthcare represented in the traditional literature. Finally, the paper concludes with some thoughts about the value of a more complex and nuanced approach to understanding and promoting health.