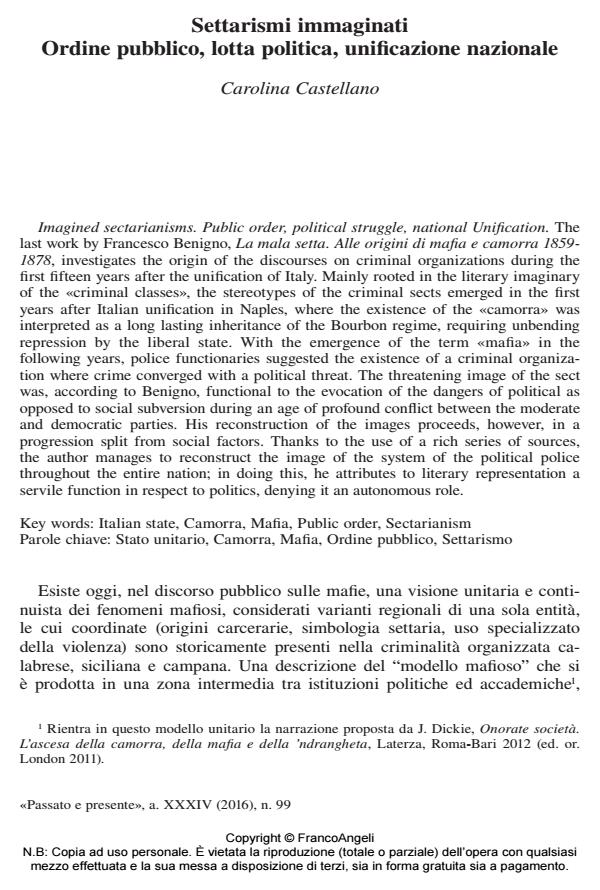 Imagined sectarianisms. Public order, political struggle, national Unification The last work by Francesco Benigno, La mala setta. Alle origini di mafia e camorra 1859- 1878, investigates the origin of the discourses on criminal organizations during the first fifteen years after the unification of Italy. Mainly rooted in the literary imaginary of the «criminal classes», the stereotypes of the criminal sects emerged in the first years after Italian unification in Naples, where the existence of the «camorra» was interpreted as a long lasting inheritance of the Bourbon regime, requiring unbending repression by the liberal state. With the emergence of the term «mafia» in the following years, police functionaries suggested the existence of a criminal organization where crime converged with a political threat. The threatening image of the sect was, according to Benigno, functional to the evocation of the dangers of political as opposed to social subversion during an age of profound conflict between the moderate and democratic parties. His reconstruction of the images proceeds, however, in a progression split from social factors. Thanks to the use of a rich series of sources, the author manages to reconstruct the image of the system of the political police throughout the entire nation; in doing this, he attributes to literary representation a servile function in respect to politics, denying it an autonomous role.

Sexual discourses, norms and practices in nineteenth-century Italy The book looks at sexual discourses, models, practices and experiences (in the plural) in nineteenth-century Italy, paying specific attention to the public-political sphere, and pointing out how sexual behaviours and real-life experiences of sexuality were talked about. The aim is to shed light on the role played by the Nation-State and its laws, by science and its strict hygienic-physiological paradigms, in norming the (allegedly overwhelming) sexual chaos and disorder of the country and in putting forward a desexualised, male-centred conception of family.

Unemployment in Italy: A social and political history As part of labour history and economic history, unemployment is now a fully-fledged subject of research. Manfredi Alberti’s Senza lavoro. La disoccupazione in Italia dall’Unità a oggi is devoted to the history of unemployment in Italy from 1861 to today. The book moves from a historical-economic and historical-statistical approach, but it also pays attention to social and cultural history, as well as to the legislative responses by the government and the role of the workers’ movement. Based on the Italian case, Alberti’s work highlights that the concept of unemployment is an integral element to capitalism and the existence of a link between its increase and the adoption of laissez-faire policies.;