More efficient and coherent CSDP? Mechanisms and operations in the post-Lisbon phase 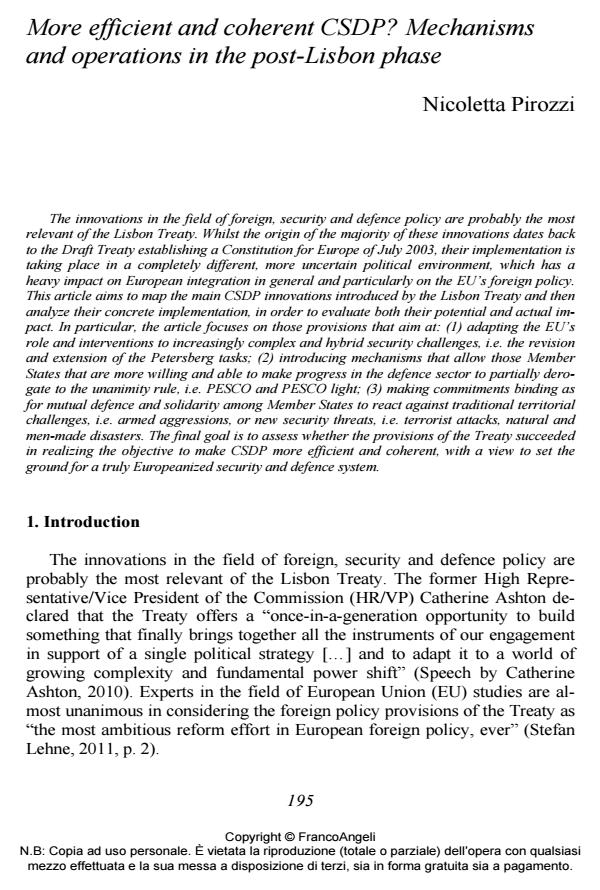 The innovations in the field of foreign, security and defence policy are probably the most relevant of the Lisbon Treaty. Whilst the origin of the majority of these innovations dates back to the Draft Treaty establishing a Constitution for Europe of July 2003, their implementation is taking place in a completely different, more uncertain political environment, which has a heavy impact on European integration in general and particularly on the EU’s foreign policy. This article aims to map the main CSDP innovations introduced by the Lisbon Treaty and then analyze their concrete implementation, in order to evaluate both their potential and actual impact. In particular, the article focuses on those provisions that aim at: (1) adapting the EU’s role and interventions to increasingly complex and hybrid security challenges, i.e. the revision and extension of the Petersberg tasks; (2) introducing mechanisms that allow those Member States that are more willing and able to make progress in the defence sector to partially derogate to the unanimity rule, i.e. PESCO and PESCO light; (3) making commitments binding as for mutual defence and solidarity among Member States to react against traditional territorial challenges, i.e. armed aggressions, or new security threats, i.e. terrorist attacks, natural and men-made disasters. The final goal is to assess whether the provisions of the Treaty succeeded in realizing the objective to make CSDP more efficient and coherent, with a view to set the ground for a truly Europeanized security and defence system