At the origin of the notion of ‘creative’ goods in economics: Scitovsky and Hawtrey 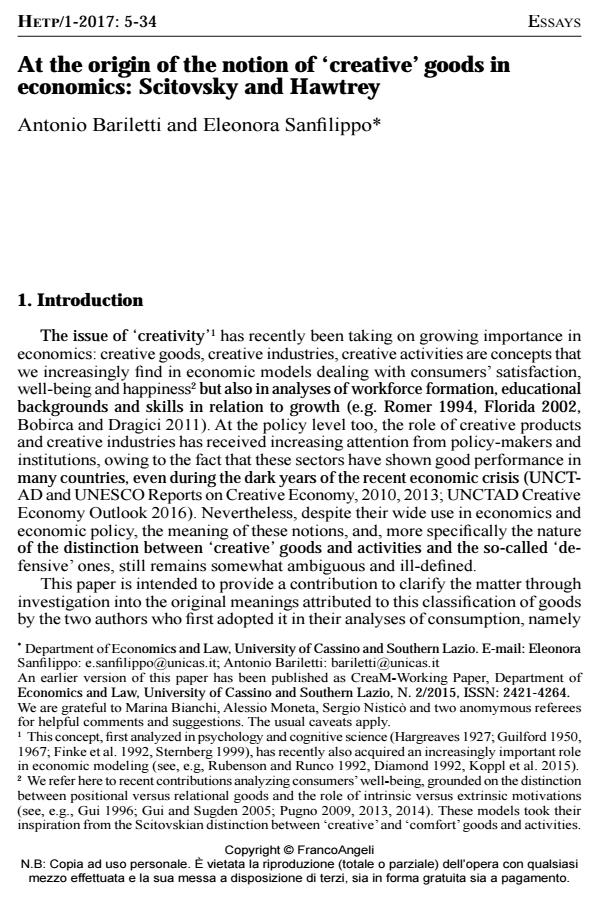 The notion of ‘creativity’ has taken on growing importance in the recent economic literature on happiness, motivations and life-satisfaction. Starting from the seminal contribution by Scitovsky, the effects of ‘creative’ goods and activities on consumers’ well-being, in connection with cultural, sociological, psychological and educational aspects, have been analyzed. An increasing interest in these concepts has also recently been shown by policy-makers and international institutions (see, e.g., the UNCTAD/UNESCO Reports on Creative Economy, 2010, 2013, 2016). On the other hand, a clear analytical definition of this category of goods and activities and searching investigation into its peculiar characteristics in comparison with other types of products and activities, broadly defined as comfort or defensive ones, is still lacking in economic literature. This is why, despite its wide use, the nature of the distinction and the role it should play in economic analysis still remain somewhat vague and ambiguous. The aim of this paper is to provide a contribution to help clarify this distinction by reconstructing and comparing its original meaning and purpose in the works of Scitovsky (1976, 1992) and Hawtrey (1925) - the first economists who attributed a fundamental role to the notion of ‘creative’ goods in their analyses of consumption behavior.