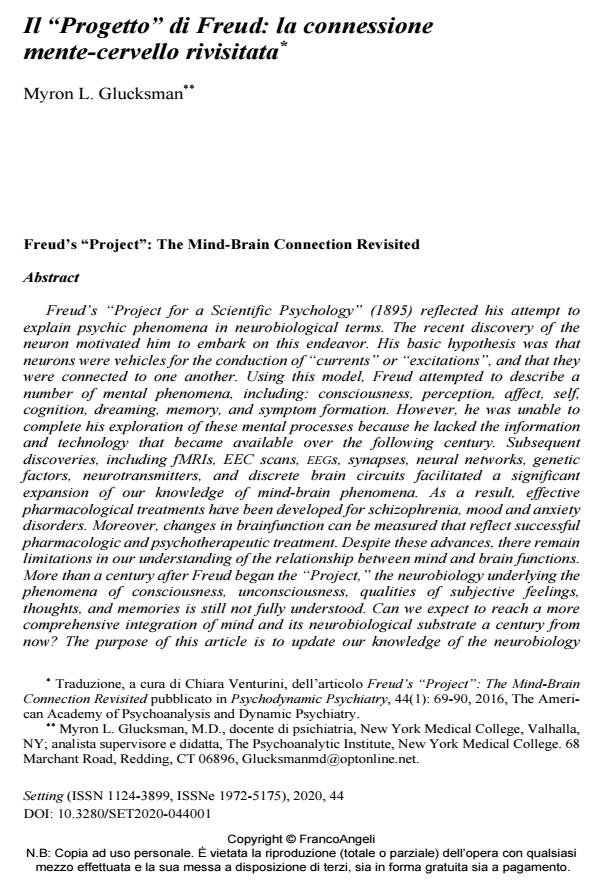 Freud’s "Project for a Scientific Psychology" (1895) reflected his attempt to explain psychic phenomena in neurobiological terms. The recent discovery of the neuron motivated him to embark on this endeavor. His basic hypothesis was that neurons were vehicles for the conduction of "currents" or "excitations", and that they were connected to one another. Using this model, Freud attempted to describe a number of mental phenomena, including: consciousness, perception, affect, self, cognition, dreaming, memory, and symptom formation. However, he was unable to complete his exploration of these mental processes because he lacked the information and technology that became available over the following century. Subsequent discoveries, including fMRIs, EEC scans, EEGs, synapses, neural networks, genetic factors, neurotransmitters, and discrete brain circuits facilitated a significant expansion of our knowledge of mind-brain phenomena. As a result, effective pharmacological treatments have been developed for schizophrenia, mood and anxiety disorders. Moreover, changes in brainfunction can be measured that reflect successful pharmacologic and psychotherapeutic treatment. Despite these advances, there remain limitations in our understanding of the relationship between mind and brain functions. More than a century after Freud began the "Project," the neurobiology underlying the phenomena of consciousness, unconsciousness, qualities of subjective feelings, thoughts, and memories is still not fully understood. Can we expect to reach a more comprehensive integration of mind and its neurobiological substrate a century from now? The purpose of this article is to update our knowledge of the neurobiology associated with the specific mental functions that Freud examined in the "Project", and to pose questions concerning mind-brain phenomena that will hopefully be answered in the future.