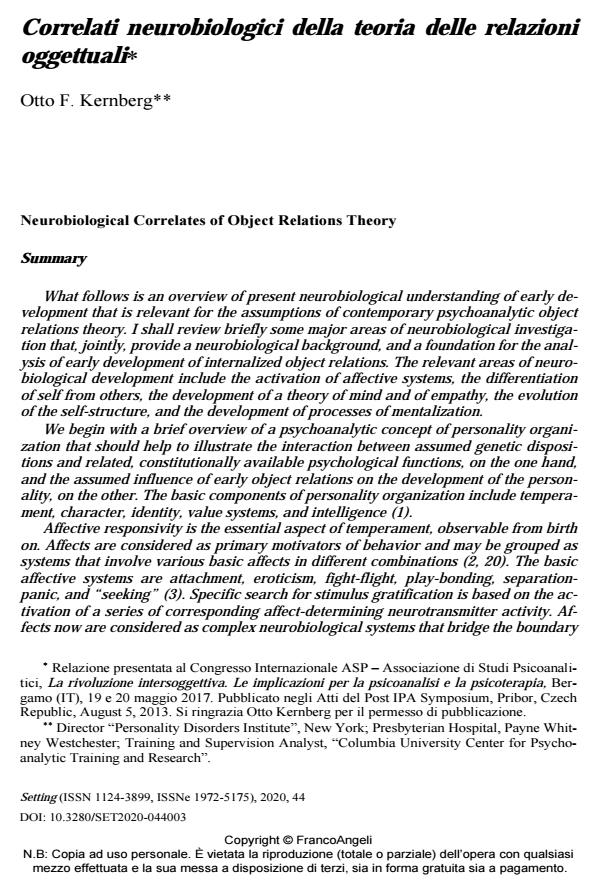 What follows is an overview of present neurobiological understanding of early development that is relevant for the assumptions of contemporary psychoanalytic object relations theory. I shall review briefly some major areas of neurobiological investigation that, jointly, provide a neurobiological background, and a foundation for the analysis of early development of internalized object relations. The relevant areas of neurobiological development include the activation of affective systems, the differentiation of self from others, the development of a theory of mind and of empa-thy, the evolution of the self-structure, and the development of processes of mentali-zation. We begin with a brief overview of a psychoanalytic concept of personality or-ganization that should help to illustrate the interaction between assumed genetic dispositions and related, constitutionally available psychological functions, on the one hand, and the assumed influence of early object relations on the development of the personality, on the other. The basic components of personality organization in-clude temperament, character, identity, value systems, and intelligence (1). Affective responsivity is the essential aspect of temperament, observable from birth on. Affects are considered as primary motivators of behavior and may be grouped as systems that involve various basic affects in different combinations (2, 20). The basic affective systems are attachment, eroticism, fight-flight, play-bonding, separation-panic, and "seeking" (3). Specific search for stimulus gratification is based on the activation of a series of corresponding affect-determining neurotrans-mitter activity. Affects now are considered as complex neurobiological systems that bridge the boundary between physiological and mental experience, signaling to the organism its internal, desirable or undesirable subjective state, and, simultaneously, signaling to the infant’s mothering object the affective state of the infant. Affects, in short, have a subjective and a communicative function, in addition to their direct behavioral manifestations, neurovegetative discharge, and cognitive framing. Cog-nitive framing is an essential aspect of affect activation and conveys information regarding the stimulus impinging of the organism in terms of "where is it", "is it good or bad for me", "what shall I do about it". From a psychoanalytic point of view, affects as primary motivational systems raise the questions regarding the extent to which drives are constituted by the inte-gration of corresponding positive ("libidinal") or negative ("aggressive") affects, and the extent to which affects are the expression of these assumed underlying cor-responding drives. In any case, affects initiate the interactions between self and oth-er, and the internalization of these interactions, in the form of affective memory, de-termine internalized models of behavior (in attachment terminology), or internalized object relations (in psychoanalytic object relations theory language). These inter-nalized models, or object relations, gradually determine integrated, reactive habitu-al behavior patterns that constitute character. The subjective organization of the experience of self, as part of internalized object relations, gradually consolidates into an integrated concept of self, with a parallel organization of the concept of significant others; in other words, normal identity (4). Normal identity represents the subjective correlate of character, while character reflects, in its dynamic integration of behavior patterns, the behavioral expression of identity. The gradual internaliza-tion of non-instrumental, general rules of social behavior or ethical value systems, (the "super ego" in psychoanalytic terms), constitutes a secondary level of personality organization derived from the internalization of object relations. Finally, the very potential for cognitive framing of affective experience, and of all perceived ex-periences in general, with the potential of abstraction of concrete experience into general rules and comprehension of the relation between self and the physical and psychosocial environment constitutes intelligence.