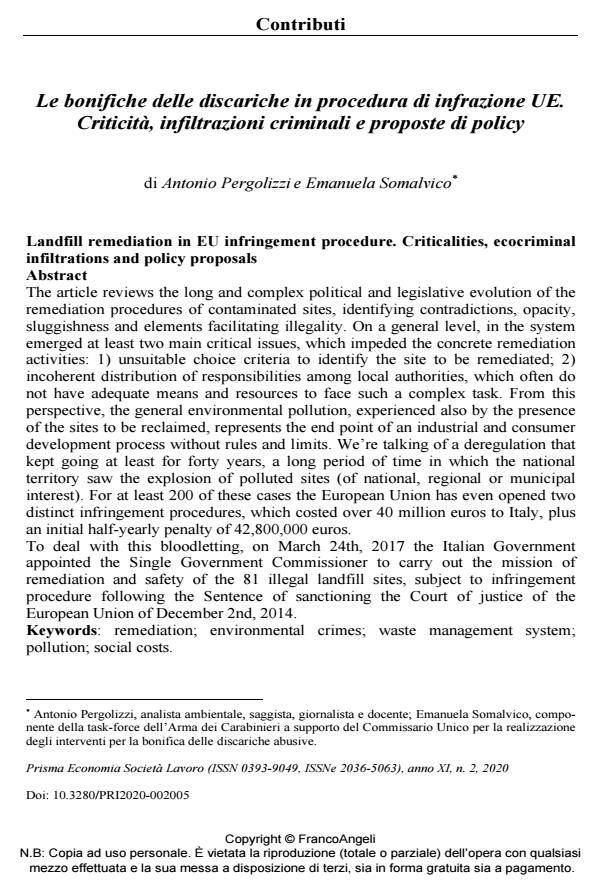 The article reviews the long and complex political and legislative evolution of the remediation procedures of contaminated sites, identifying contradictions, opacity, sluggishness and elements facilitating illegality. On a general level, in the system emerged at least two main critical issues, which impeded the concrete remediation activities: 1) unsuitable choice criteria to identify the site to be remediated; 2) incoherent distribution of responsibilities among local authorities, which often do not have adequate means and resources to face such a complex task. From this perspective, the general environmental pollution, experienced also by the presence of the sites to be reclaimed, represents the end point of an industrial and consumer development process without rules and limits. We’re talking of a deregulation that kept going at least for forty years, a long period of time in which the national territory saw the explosion of polluted sites (of national, regional or municipal interest). For at least 200 of these cases the European Union has even opened two distinct infringement procedures, which costed over 40 million euros to Italy, plus an initial half-yearly penalty of 42,800,000 euros. To deal with this bloodletting, on March 24th, 2017 the Italian Government appointed the Single Government Commissioner to carry out the mission of remediation and safety of the 81 illegal landfill sites, subject to infringement procedure following the Sentence of sanctioning the Court of justice of the European Union of December 2nd, 2014.