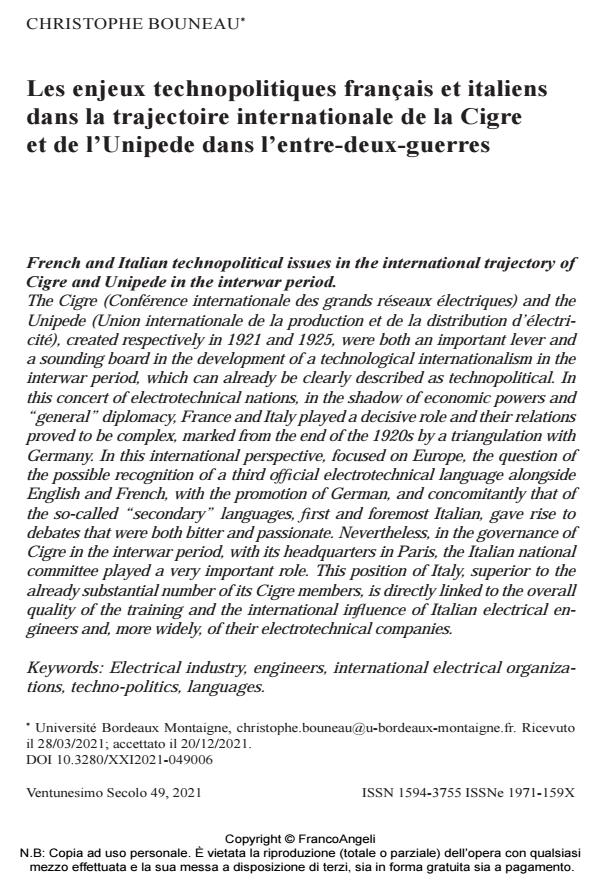 The Cigre (Conférence internationale des grands réseaux électriques) and the Unipede (Union internationale de la production et de la distribution d’électricité), created respectively in 1921 and 1925, were both an important lever and a sounding board in the development of a technological internationalism in the interwar period, which can already be clearly described as technopolitical. In this concert of electrotechnical nations, in the shadow of economic powers and "general" diplomacy, France and Italy played a decisive role and their relations proved to be complex, marked from the end of the 1920s by a triangulation with Germany. In this international perspective, focused on Europe, the question of the possible recognition of a third offi cial electrotechnical language alongside English and French, with the promotion of German, and concomitantly that of the so-called "secondary" languages, fi rst and foremost Italian, gave rise to debates that were both bitter and passionate. Nevertheless, in the governance of Cigre in the interwar period, with its headquarters in Paris, the Italian national committee played a very important role. This position of Italy, superior to the already substantial number of its Cigre members, is directly linked to the overall quality of the training and the international infl uence of Italian electrical engineers and, more widely, of their electrotechnical companies.