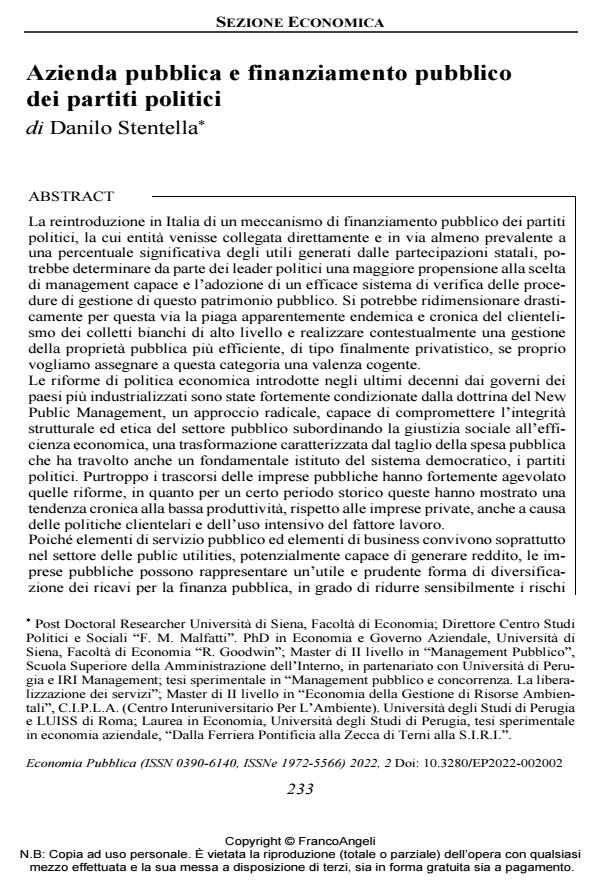 The reintroduction in Italy of a public funding mechanism for political parties, the entity of which was directly and at least mainly linked to a significant percentage of the profits generated by state shareholdings, could lead to a greater propensity for political leaders to choose management talented and the adoption of an effective system of verification of the management procedures of this public heritage. In this way, the apparently endemic plague of high-level white-collar clientelism could be drastically reduced and at the same time realized a more efficient management of public property, of a private nature, if we really want to assign this category a cogent value. The economic policy reforms introduced in recent decades by the governments of the most industrialized countries have been strongly influenced by the doctrine of New Public Management, a radical approach capable of compromising the structural and ethical integrity of the public sector by subordinating social justice to economic efficiency, a transformation characterized by the cut in public spending that has also overwhelmed a fundamental institution of the democratic system, the political parties. Unfortunately, the past of public enterprises has greatly facilitated those reforms, as for a certain historical period these have shown a chronic tendency towards low productivity, compared to private enterprises, also due to clientelist policies and intensive use of the labor factor. Since public service elements and business elements coexist especially in the public utilities sector, the latter capable of generating income, public enterprises can represent a useful and prudent form of diversification of revenues for public finance that can significantly reduce liquidity risks, even more in a historical phase of recurrent international financial and economic crises. With the reintroduction of public funding of parties, directly and exclusively connected to a significant percentage of the profits generated by state participations, the choice of capable management and careful verification of administrative procedures would certainly be an essential concern of political leaders. Public funding of political parties was introduced in 1974 with the L. 195/1974 to counteract the collusions with big economic powers, already arisen in previous years. It was completely abolished with D.L. 149/2013, converted into L. 13/2014, leaving space to a growing lobbying activity and indirect party financing. The question this paper tries to answer is: can the public company be efficiently managed by the State, produce income and services for the community, without improperly giving rise to chronically negative management results and help to finance the constitutionally guaranteed right to organize into political parties by financing their mechanism?