An attempt at local propaganda: the protagonists of the Fascist Cultural Institute of Milan in the 1920s 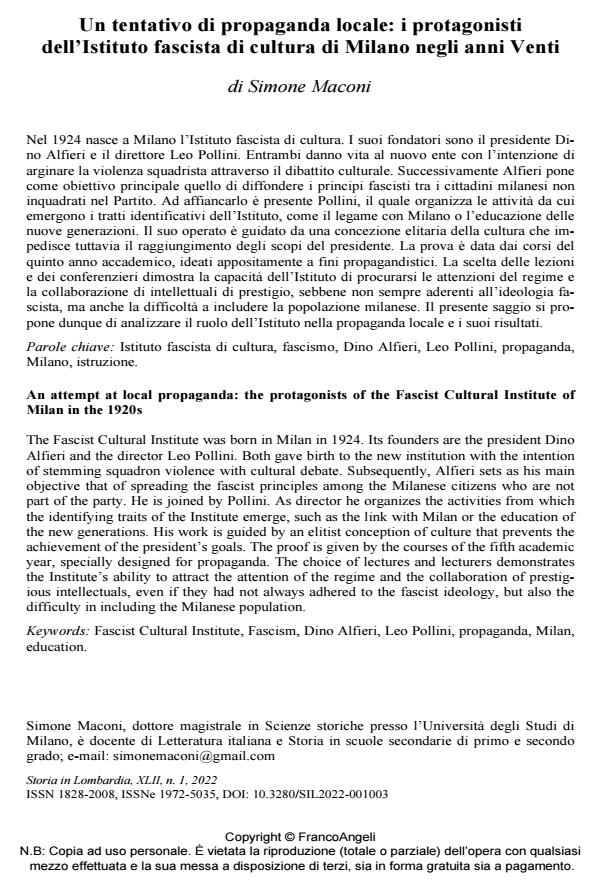 The Fascist Cultural Institute was born in Milan in 1924. Its founders are the president Dino Alfieri and the director Leo Pollini. Both gave birth to the new institution with the intention of stemming squadron violence with cultural debate. Subsequently, Alfieri sets as his main objective that of spreading the fascist principles among the Milanese citizens who are not part of the party. He is joined by Pollini. As director he organizes the activities from which the identifying traits of the Institute emerge, such as the link with Milan or the education of the new generations. His work is guided by an elitist conception of culture that prevents the achievement of the president’s goals. The proof is given by the courses of the fifth academic year, specially designed for propaganda. The choice of lectures and lecturers demonstrates the Institute’s ability to attract the attention of the regime and the collaboration of prestig- ious intellectuals, even if they had not always adhered to the fascist ideology, but also the difficulty in including the Milanese population.