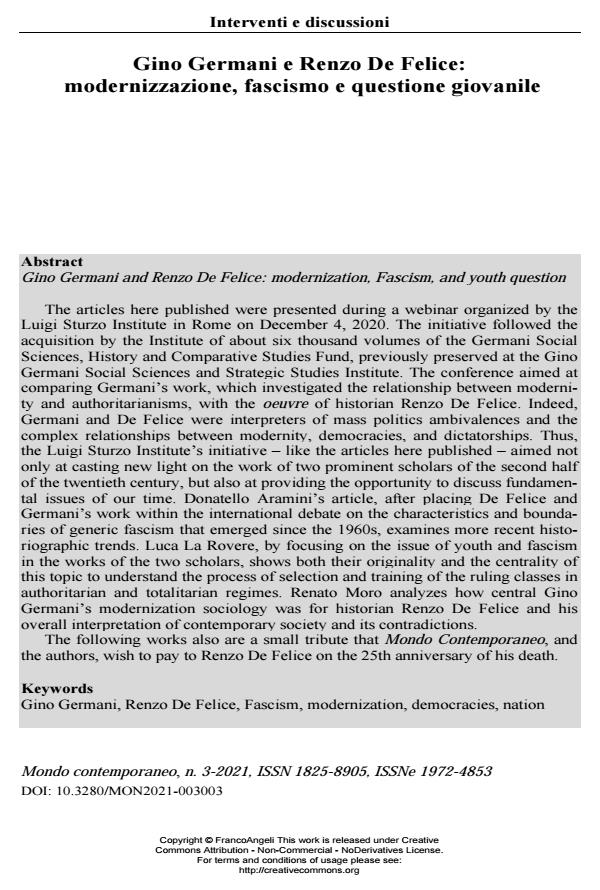 The articles here published were presented during a webinar organized by the Luigi Sturzo Institute in Rome on December 4, 2020. The initiative followed the acquisition by the Institute of about six thousand volumes of the Germani Social Sciences, History and Comparative Studies Fund, previously preserved at the Gino Germani Social Sciences and Strategic Studies Institute. The conference aimed at comparing Germani’s work, which investigated the relationship between modernity and authoritarianisms, with the oeuvre of historian Renzo De Felice. Indeed, Ger-mani and De Felice were interpreters of mass politics ambivalences and the com-plex relationships between modernity, democracies, and dictatorships. Thus, the Luigi Sturzo Institute’s initiative - like the articles here published - aimed not only at casting new light on the work of two prominent scholars of the second half of the twentieth century, but also at providing the opportunity to discuss fundamen-tal issues of our time. Donatello Aramini’s article, after placing De Felice and Ger-mani’s work within the international debate on the characteristics and boundaries of generic fascism that emerged since the 1960s, examines more recent historio-graphic trends. Luca La Rovere, by focusing on the issue of youth and fascism in the works of the two scholars, shows both their originality and the centrality of this topic to understand the process of selection and training of the ruling classes in au-thoritarian and totalitarian regimes. Renato Moro analyzes how central Gino Ger-mani’s modernization sociology was for historian Renzo De Felice and his overall interpretation of contemporary society and its contradictions. The following works also are a small tribute that Mondo Contemporaneo, and the authors, wish to pay to Renzo De Felice on the 25th anniversary of his death.