The Case for a Supra-national Control on Commodities in the post WWII World: Novel Perspectives from FAO and Kaldor Archives 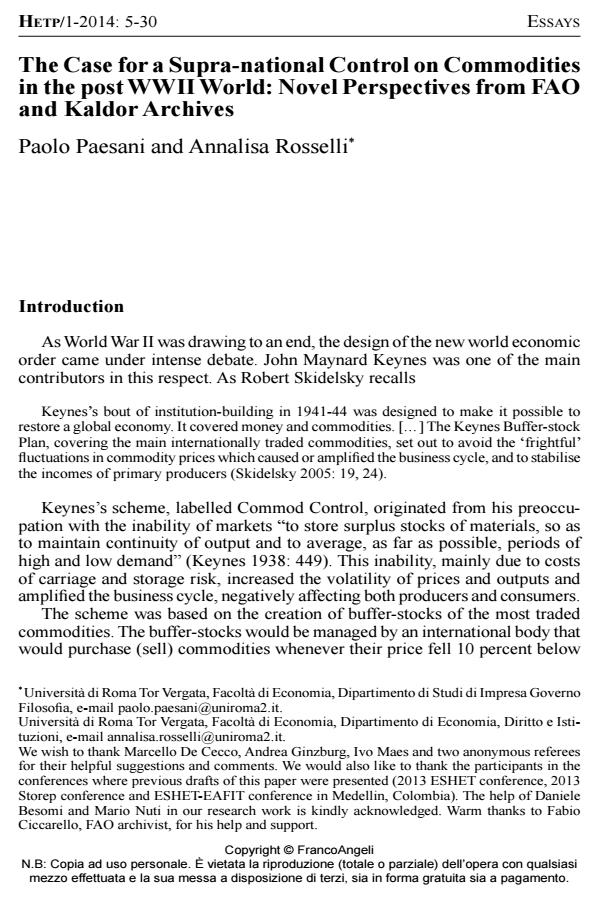 Commodity markets are characterized by high price volatility, inefficient resource allocation and the cyclical reappearance of excessive surpluses and shortages. Historically, these problems and their relevant socio-economic implications have been tackled by means of protectionist measures at the national level, with cartels among producers or, in some rare cases, with international agreements among producers and consumers of a single commodity. At the end of World War II, however, a number of ambitious projects were put forth by multilateral organizations and by individual economists. These projects (e.g. World Food Board, International Commodity Clearing House, International Commodity Reserve Currency) aimed at overcoming traditional commodity problems by means of supra-national institutions and the coordinated management of all the main commodities within a unified scheme capable of combining stable prices and abundant supplies. The goal of this paper is to reconstruct some of these proposals, their theoretical underpinnings and the debate they roused. In particular, we intend to focus on the role played by the Food and Agriculture Organisation and by the experts who were involved in its projects. While individual contributions by some economists belonging to this group of experts have been widely investigated in the literature, their reciprocal influences and the relevant intellectual and historical context have received much less attention. Recent important publications bearing on this question and the re-opening of FAO archives add new angles on and insights into this issue.

Paolo Paesani, Annalisa Rosselli, The Case for a Supra-national Control on Commodities in the post WWII World: Novel Perspectives from FAO and Kaldor Archives in "HISTORY OF ECONOMIC THOUGHT AND POLICY" 1/2014, pp 5-30, DOI: 10.3280/SPE2014-001001