Youth and Fascism in the works of Gino Germani and Renzo De Felice: relationships, consonances, divergences 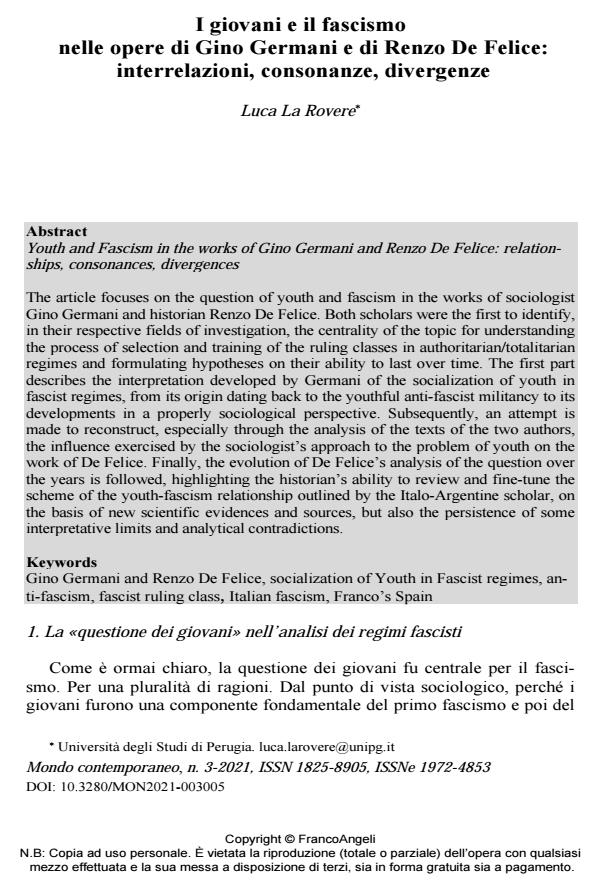 The article focuses on the question of youth and fascism in the works of sociolo-gist Gino Germani and historian Renzo De Felice. Both scholars were the first to identify, in their respective fields of investigation, the centrality of the topic for un-derstanding the process of selection and training of the ruling classes in authoritar-ian/totalitarian regimes and formulating hypotheses on their ability to last over time. The first part describes the interpretation developed by Germani of the socialization of youth in fascist regimes, from its origin dating back to the youthful anti-fascist militancy to its developments in a properly sociological perspective. Subsequently, an attempt is made to reconstruct, especially through the analysis of the texts of the two authors, the influence exercised by the sociologist’s approach to the problem of youth on the work of De Felice. Finally, the evolution of De Felice’s analysis of the question over the years is followed, highlighting the his-torian’s ability to review and fine-tune the scheme of the youth-fascism relationship outlined by the Italo-Argentine scholar, on the basis of new scientific evidenc-es and sources, but also the persistence of some interpretative limits and analytical contradictions.