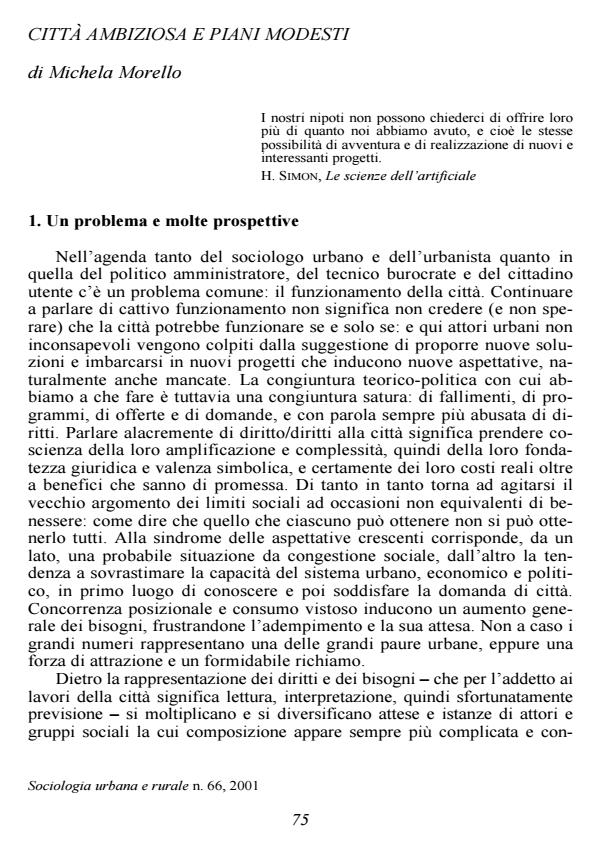 The theoretical-political conjuncture which we find ourselves in is saturated with failures, programs, supply and demand, and to beat a dead horse rights. To speak briskly on a right (or rights) to the city is to became aware of their enlarge-ment and complexity, legal basis and symbolic valence, and, surely, real costs be-sides promised benefits. The increasing expectations syndrome corresponds, on the one hand, to what is probably a situation of social congestion, on the other, to the tendency to overestimate the ability of the urban, economic and political sys-tem to know and thus to meet the demand for city. The urban experience in the crisis of modernity has dismantled theoretical truisms and become familiar with the emergence of disorder, propeller of social change in directions that are not al-ways clear. In this framework, the city’s complex and disorderly organization fu-els the search for bargaining tools for the city’s governance and for attaining the three ambitious ‘e’s: efficient, effective, and economical choices and strategies which make the urban promise’s objectives possible or more attainable. The con-nection that must be constructed among choices, strategies, and objectives pres-ents itself as the organizational problem, while the decision and its rationale are continuously relativized in the light of cost-benefit calculus. This happens today as in the past, but with a different conception of responsibility to the future through the production of choices, polices, and plans that are rational, not in themselves, but in relation to a determinate, contextual objective of effectiveness, adaptiveness and perhaps even urban justice.